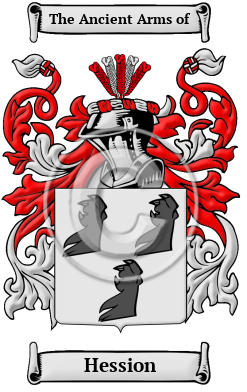 When the ancestors of the Hession family arrived in England following the Norman Conquest of 1066, they brought their name with them. It is a name for a door keeper to a king. Further research showed the name was derived from the Old French word l'ussier, meaning the door keeper. This job held considerable status, as it entailed knowing the rank and status of all those who would enter the King's chambers. [1]

Early Origins of the Hession family

The surname Hession was first found in Durham where it is said they were descended from Richard de Neuville, the Admiral of Duke William's fleet, who was granted lands originally in Westmorland. His third son was entrusted with the defense of Bridgnorth in 1102.

"James Ussher, the celebrated Archbishop of Armagh, was a son of A. Ussher, one of the six clerks in Chancery, descended from a branch of the Norman family of De Neville, which assumed the name of Le Uschere or Le Huissier, from the office of Ostiarius granted to them by King John. Of this family was the gallant Admiral Sir Thomas Ussher." [2]

In Essex, the first record of the family was found at Colchester where Richard Ussier was registered. William le Usser or Lussier was found in the Assize Rolls for Somerset in 1243 and later, Geoffrey le Uscher was listed in Cambridgeshire in 1300. In Bedfordshire, Richard Lusscher was registered in the Subsidy Rolls of 1319 and in Cumberland, the Subsidy Rolls of 1332 included Adam Husser. [3]

Early History of the Hession family

Endless spelling variations are a prevailing characteristic of Norman surnames. Old and Middle English lacked any definite spelling rules, and the introduction of Norman French added an unfamiliar ingredient to the English linguistic stew. French and Latin, the languages of the court, also influenced spellings. Finally, Medieval scribes generally spelled words according to how they sounded, so one person was often referred to by different spellings in different documents. The name has been spelled Usher, Ussher and others.

In the United States, the name Hession is the 17,306th most popular surname with an estimated 2,487 people with that name. [4]

Migration of the Hession family to Ireland

Some of the Hession family moved to Ireland, but this topic is not covered in this excerpt.
Another 121 words (9 lines of text) about their life in Ireland is included in all our PDF Extended History products and printed products wherever possible.

Hession migration to the United States +

To escape the political and religious persecution within England at the time, many English families left for the various British colonies abroad. The voyage was extremely difficult, though, and the cramped, dank ships caused many to arrive in the New World diseased and starving. But for those who made it, the trip was most often worth it. Many of the families who arrived went on to make valuable contributions to the emerging nations of Canada and the United States. An inquiry into the early roots of North American families reveals a number of immigrants bearing the name Hession or a variant listed above:

Hession Settlers in United States in the 19th Century

Hession Settlers in Canada in the 19th Century

Hession Settlers in New Zealand in the 19th Century