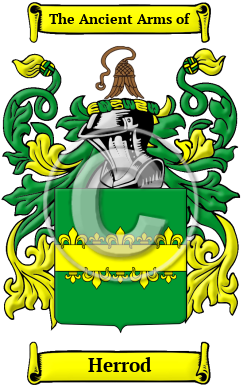 Early Origins of the Herrod family

The surname Herrod was first found in Argyllshire (Gaelic erra Ghaidheal), the region of western Scotland corresponding roughly with the ancient Kingdom of Dál Riata, in the Strathclyde region of Scotland, now part of the Council Area of Argyll and Bute.

Early History of the Herrod family

This web page shows only a small excerpt of our Herrod research. Another 75 words (5 lines of text) covering the years 1685, 1566, 1626 and 1566 are included under the topic Early Herrod History in all our PDF Extended History products and printed products wherever possible.

Notable amongst the family at this time was Francis Harold, O.F.M. (died 1685), an Irish Franciscan and historical writer. He was a native of Limerick, and member of the Franciscan order, to which his uncle, Luke Wadding, was the historiographer. Harold...
Another 40 words (3 lines of text) are included under the topic Early Herrod Notables in all our PDF Extended History products and printed products wherever possible.

In the United States, the name Herrod is the 9,959th most popular surname with an estimated 2,487 people with that name. [4]

Migration of the Herrod family to Ireland

Some of the Herrod family moved to Ireland, but this topic is not covered in this excerpt.
Another 63 words (4 lines of text) about their life in Ireland is included in all our PDF Extended History products and printed products wherever possible.

Herrod migration to the United States +

Herrod Settlers in United States in the 19th Century

Historic Events for the Herrod family +