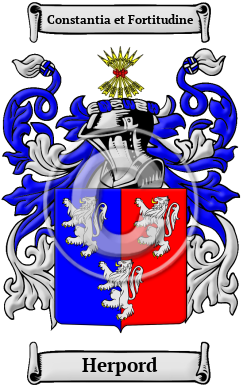 Today's generation of the Herpord family bears a name that was brought to England by the wave of emigration that was started by the Norman Conquest of 1066. It comes from the Germanic personal name Herbert. It is also an Old French given name derived from the Old German name Hariberct or Her(e)bert. This Germanic name contains the elements harja which means army and berhta, which means bright. The name was first borne by St. Herbert or Herebert (d. 687), who was an early "hermit, resided on the island in Derwentwater which still bears his name. He was a disciple and close friend of St. Cuthbert, to whom he paid an annual visit for spiritual advice. The two friends both died on 20 March 687, Herebert suffering much from sickness before his death." [1]

Early Origins of the Herpord family

The surname Herpord was first found in the Domesday Book of 1086 where the Latin forms of the name, Herbertus and Hereberd were recorded. [3]

Early History of the Herpord family

Spelling variations in names were a common occurrence in the eras before English spelling was standardized a few hundred years ago. In the Middle Ages, even the literate regularly changed the spellings of their names as the English language incorporated elements of French, Latin, and other European languages. Many variations of the name Herpord have been found, including Herbert, Herbit, Herbutt and others.

Outstanding amongst the family at this time was William Herbert, 1st Earl of Pembroke (c. 1423-1469), known as "Black William", was the son of William ap Thomas, founder of Raglan Castle; Sir John Herbert (1550-1617), Welsh lawyer and diplomat, Secretary of State under Elizabeth I and James I; Sir Henry Herbert (1595-1673), Master of the Revels to both King Charles I and King Charles II; Sir Richard Herbert; William Herbert, 1st Baron Powis (1572-1655) was a Welsh politician; Percy Herbert, 2nd Baron Powis (1598-1667), an English writer and politician; George Herbert (1593-1663), an English (Welsh born) poet and academic, who became...
Another 116 words (8 lines of text) are included under the topic Early Herpord Notables in all our PDF Extended History products and printed products wherever possible.

Migration of the Herpord family to Ireland

Some of the Herpord family moved to Ireland, but this topic is not covered in this excerpt.
Another 191 words (14 lines of text) about their life in Ireland is included in all our PDF Extended History products and printed products wherever possible.

Migration of the Herpord family

For many English families, the social climate in England was oppressive and lacked opportunity for change. For such families, the shores of Ireland, Australia, and the New World beckoned. They left their homeland at great expense in ships that were overcrowded and full of disease. Many arrived after the long voyage sick, starving, and without a penny. But even those were greeted with greater opportunity than they could have experienced back home. Numerous English settlers who arrived in the United States and Canada at this time went on to make important contributions to the developing cultures of those countries. Many of those families went on to make significant contributions to the rapidly developing colonies in which they settled. Early North American records indicate many people bearing the name Herpord were among those contributors: Elizabeth Herbert, who settled in Barbados in 1671; John Herbert settled in Salem Massachusetts in 1630; Thomas Herbert settled in Virginia in 1651; William Herbert and his wife Elizabeth settled in Barbados in 1679.