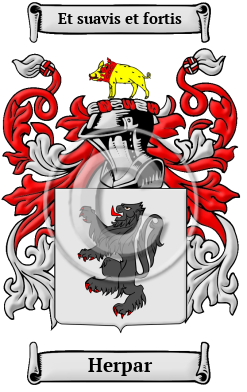 The first family to use the name Herpar lived in the area that was once the ancient Scottish kingdom of Dalriada. It is a name for a person who occupies the role of "harper". In ancient times the harper was considered an important figurehead whereby Brehon laws stated that the elegance and music of the harp "deserved" a noble status. "In some districts lands were attached to the office as shown by the place names Croit a' Chlarsair, 'the Harper's Croft,' in the parish of Kiltarlity, near Dundonald, Ayrshire, and elsewhere, and the lands of Harperfield in the parish of Lesmahagow are probably of the same origin. " [1]

Early Origins of the Herpar family

In Somerset, Adam le Harper and Thomas le Harpour were both recorded there 1 Edward III (during the first year of the reign of King Edward III.) [3]

Early History of the Herpar family

Translation in medieval times was an undeveloped science and was often carried out without due care. For this reason, many early Scottish names appeared radically altered when written in English. The spelling variations of Herpar include Harper, Harpur, Harpar, Harepur and others.

Notable amongst the Clan from early times was Henry Harper, High Sheriff of Herefordshire in 1496; Sir William Harpur (c.1496-1574), English merchant from Bedford who moved to London, became Lord Mayor of London and in 1566 he and his wife Dame Alice created...
Another 42 words (3 lines of text) are included under the topic Early Herpar Notables in all our PDF Extended History products and printed products wherever possible.

Migration of the Herpar family to Ireland

Some of the Herpar family moved to Ireland, but this topic is not covered in this excerpt.
Another 72 words (5 lines of text) about their life in Ireland is included in all our PDF Extended History products and printed products wherever possible.

Migration of the Herpar family

Many settled along the east coast of what would become the United States and Canada. As the American War of Independence broke out, those who remained loyal to the crown went north to Canada as United Empire Loyalists. The ancestors of all of these hardy Dalriadan-Scottish settlers began to recover their collective history in the 20th century with the advent of the vibrant culture fostered by highland games and Clan societies in North America. Highland games, clan societies, and other organizations generated much renewed interest in Scottish heritage in the 20th century. The Herpar were among the earliest of the Scottish settlers as immigration passenger lists have shown: John Harper who was a resident of Virginia in 1607 and 1608. Another John settled in the same colony in 1642. Patrick Harper settled in Virginia in 1653. In Newfoundland, Anthony Harper, was a servant of Oderin, about 1730.