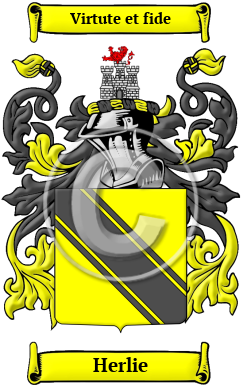 Herlie is a name whose history is connected to the ancient Anglo-Saxon tribes of Britain. The name is derived from when the Herlie family once lived in Harley, a place-name found in Shropshire and in the West Riding of Yorkshire. The place-name is derived from the Old English words hare, which meant hare or rabbit, and leah, which meant forest clearing. The name as a whole meant "clearing with lots of rabbits." The original bearers of the name lived near or in such a clearing.

Early Origins of the Herlie family

The surname Herlie was first found in Shropshire where "it appears that Edward and Hernulf, living in the first half of the twelfth century, were lords of Harley, and the ancestors of the race who were afterwards denominated therefrom. Sixth in descent from William de Harley living in 1231 was Sir Robert de Harley." [1]

Early History of the Herlie family

Sound was what guided spelling in the essentially pre-literate Middle Ages, so one person's name was often recorded under several variations during a single lifetime. Also, before the advent of the printing press and the first dictionaries, the English language was not standardized. Therefore, spelling variations were common, even among the names of the most literate people. Known variations of the Herlie family name include Harley, Hurley, Harrily and others.

Distinguished members of the family include William Hurley (known works 1319-1354), King's Master Carpenter for King Edward III; John Harley (died 1558), an English Bishop of Hereford; John Harley, High Sheriff of Herefordshire in 1549; Sir Robert Harley (1579-1656), an English statesman who served as Master of the Mint for Charles I; Sir Edward Harley KB (1624-1700), an English Parliamentarian, Governor of Dunkirk, born at Brampton Bryan, Herefordshire; and his son, Edward Harley (1664-1735), of Eywood, Titley, Herefordshire, Auditor of the Imprests (1703-1735)...
Another 83 words (6 lines of text) are included under the topic Early Herlie Notables in all our PDF Extended History products and printed products wherever possible.

Migration of the Herlie family to Ireland

Some of the Herlie family moved to Ireland, but this topic is not covered in this excerpt. More information about their life in Ireland is included in all our PDF Extended History products and printed products wherever possible.

Migration of the Herlie family

For political, religious, and economic reasons, thousands of English families boarded ships for Ireland, Canada, the America colonies, and many of smaller tropical colonies in the hope of finding better lives abroad. Although the passage on the cramped, dank ships caused many to arrive in the New World diseased and starving, those families that survived the trip often went on to make valuable contributions to those new societies to which they arrived. Early immigrants bearing the Herlie surname or a spelling variation of the name include: Edmund Harley settled in Maryland in 1725; Charles, Dennis, Edward, James, John, Michael, Patrick, Thomas and William Harley, all arrived in Philadelphia between 1840 and 1860..