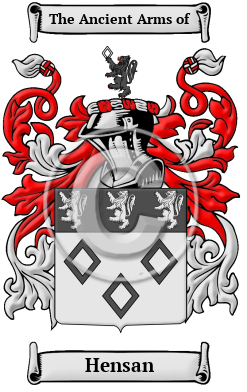 Hensan is one of the oldest family names to come from the Anglo-Saxon tribes of Britain. It is derived from the baptismal name for the "son of Henry," or "the son of Heyn." [1]

Early Origins of the Hensan family

The surname Hensan was first found in Yorkshire where the Hundredorum Rolls of 1273 listed: Adam Hanneson; Robertus Hanson; Willelmus Hanson; Johanna Hanson, wyf (wife); and Johannes Hanneson as all holding lands there at that time. [1]

Early History of the Hensan family

Notables of this surname at this time include: John Hanson (fl. 1604), English poet, who proceeded B.A. from Peterhouse, Cambridge, in 1603-1604." He was author of a very rare volume of verse, entitled 'Time is a Turn-coate, or England's Threefold Metamorphosis ; also a pageant speech or Idylion pronounced to the citie of London before the entrance of her long expected consort,' i.e. James I, London, printed for J. H., 1604." [4] Another John...
Another 72 words (5 lines of text) are included under the topic Early Hensan Notables in all our PDF Extended History products and printed products wherever possible.

Migration of the Hensan family

To escape the unstable social climate in England of this time, many families boarded ships for the New World with the hope of finding land, opportunity, and greater religious and political freedom. Although the voyages were expensive, crowded, and difficult, those families that arrived often found greater opportunities and freedoms than they could have experienced at home. Many of those families went on to make significant contributions to the rapidly developing colonies in which they settled. Early North American records indicate many people bearing the name Hensan were among those contributors: John Hanson, who settled in Maryland in 1691; Samuel Hanson settled in Barbados in 1679; Simon Hanson arrived in New York in 1687; Charles, Frederick, James, John, Joseph, Peter, Robert, Samuel, Thomas and William Hanson all arrived in Philadelphia between 1770 and 1860..