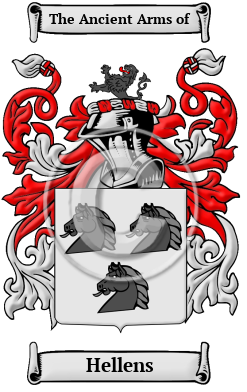 The illustrious surname Hellens is classified as a habitation surname, which was originally derived from a place-name, and is one form of surname belonging to a broader group called hereditary surnames. Habitation names were derived from pre-existing names for towns, villages, parishes, or farmsteads. Topographic names, form the other broad category of surnames that was given to a person who resided near a physical feature such as a hill, stream, church, or type of tree.

Other local names are derived from the names of houses, manors, estates, regions, and entire counties. As a general rule, the greater the distance between an individual and their homeland, the larger the territory they were named after. For example, a person who only moved to another parish would be known by the name of their original village, while people who migrated to a different country were often known by the name of a region or country from which they came. Hellens is a place-name from in Devon. Hillion, near Saint-Brieux, was the birthplace of Herve d'Helion, a companion of William the Conqueror who was awarded a barony and lands in Devon. The name could also have been a baptismal name derived from the son of Heilin.

Early Origins of the Hellens family

The surname Hellens was first found in Brittany, where Hillion, near Saint-Brieux, was the birthplace of Herve d'Helion, a companion of William the Conqueror who was awarded a barony and lands in Devon. It is there that the family established its family seat at Ashton and Credy-Helion.

Early History of the Hellens family

Notable of this family during the Middle Ages was Rowland Heyyn or Heylin (1562?-1631), Sheriff of London, "descended from an ancient family seated at Pentreheylin in the parish of Llandysilio, Mongomeryshire, whose members were hereditary cupbearers (as the name signifies) to the princes of Powys. " [3] Peter Heylin (1600-1662) of Burford, Oxfordshire, a theologian and historian whose controversial writings made him famous. He was born at Burford, Oxfordshire, in 1600, and was second son of Henry Heylyn by his wife Elizabeth, daughter of Francis Clampard of Wrentham, Kent...
Another 88 words (6 lines of text) are included under the topic Early Hellens Notables in all our PDF Extended History products and printed products wherever possible.

Migration of the Hellens family to Ireland

Some of the Hellens family moved to Ireland, but this topic is not covered in this excerpt.
Another 54 words (4 lines of text) about their life in Ireland is included in all our PDF Extended History products and printed products wherever possible.

Migration of the Hellens family

Some of the first immigrants to cross the Atlantic and come to North America carried the name Hellens, or a variant listed above: Hester Heylens, who sailed to Virginia in 1649; Mary Haylin, who came to Maryland 1720; Barbara Heylin, who arrived in Pennsylvania in 1732; H. Nicholas Helling, who arrived in Philadelphia in 1750.

Historic Events for the Hellens family +