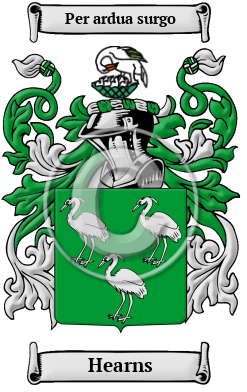 Many Irish surnames can be traced back to their Gaelic forms. The name Hearns originally appeared in Gaelic as O hEachthigheirn or O hEachthigheirna, made up of the words "each" meaning "steed," and "thighearna," meaning "lord." This was first Anglicized O'Hagherin, which was later changed to O'Aherne before the prefix was eventually dropped. [1]

Early Origins of the Hearns family

The surname Hearns was first found in County Clare (Irish: An Clár) located on the west coast of Ireland in the province of Munster, where they held a family seat as a Dalcassian sept from before the year 1000. However, with the disruptions of the Strongbow Invasion of 1172, they migrated southward to counties Cork and Waterford. In Waterford the name is predominantly Hearn and Hearne.

Early History of the Hearns family

This web page shows only a small excerpt of our Hearns research. Another 116 words (8 lines of text) covering the years 1420, 1566, 1754, 1769, 1797, and 1806 are included under the topic Early Hearns History in all our PDF Extended History products and printed products wherever possible.

Within archives, many different spelling variations exist for the surname Hearns. Ancient scribes and church officials recorded names as they were pronounced, often resulting in the name of the single person being recorded under several different spellings. Different spellings that were found include O'Aherne, O'Ahern, Hearne, O'Heffron, Haveran, Hayveren and many more.

More information is included under the topic Early Hearns Notables in all our PDF Extended History products and printed products wherever possible.

In the United States, the name Hearns is the 10,068th most popular surname with an estimated 2,487 people with that name. [2]

Irish families fled the English-colonized Ireland in record numbers during the 19th century for North America. Many of those destitute families died from disease during, and even shortly after, the long journey. Although those that immigrated before the Great Potato Famine of the 1840s often were granted a tract of land, those that arrived later were generally accommodated in urban centers or in work camps. Those in the urban centers would labor in the manufacturing sector, whereas those in work camps would to build critical infrastructures such as bridges, canals, roads, and railways. Regardless of when these Irish immigrants came to North America, they were critical for the rapid development of the young nations of the United States and Canada. Early immigration and passenger lists have recorded many early immigrants bearing the name of Hearns:

Hearns Settlers in Canada in the 18th Century

Hearns Settlers in Australia in the 19th Century