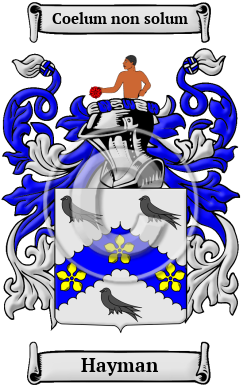 The name Hayman reached English shores for the first time with the ancestors of the Hayman family as they migrated following the Norman Conquest of 1066. The Hayman family lived in Warwickshire. The Hayman, however, does not refer to that area, but is a topographical reference to an enclosure of some sort. The name was originally derived from the Old English word haye, which meant enclosure. [1]

Early Origins of the Hayman family

The surname Hayman was first found in Warwickshire where one of the first records of the name was Walter Heyman who was listed there in the Subsidy Rolls of Warwickshire in 1332. [1]

Early History of the Hayman family

Before English spelling was standardized a few hundred years ago, spelling variations of names were a common occurrence. Elements of Latin, Norman French and other languages became incorporated into English throughout the Middle Ages, and name spellings changed even among the literate. The variations of the surname Hayman include Hayman, Heyman and others.

Outstanding amongst the family at this time was Robert Hayman (1575-1629), English poet from Newton Abbot, Devon, colonist and Proprietary Governor of Bristol's Hope colony in Newfoundland. He was the eldest of nine children. His father, Nicholas Hayman, was a prosperous citizen and later mayor and MP of both Totnes and Dartmouth. Hayman was appointed the Newfoundland colony's first and only governor in 1618 when Bristol's Society of Merchant Venturers received a charter from King James I of England to establish the settlement. Hayman lived in the colony for fifteen months, primarily in Harbour Grace, before returning to England. Sir Peter Heyman...
Another 103 words (7 lines of text) are included under the topic Early Hayman Notables in all our PDF Extended History products and printed products wherever possible.

In the United States, the name Hayman is the 8,132nd most popular surname with an estimated 2,487 people with that name. [3]

Migration of the Hayman family to Ireland

Some of the Hayman family moved to Ireland, but this topic is not covered in this excerpt. More information about their life in Ireland is included in all our PDF Extended History products and printed products wherever possible.

Hayman migration to the United States +

In England at this time, the uncertainty of the political and religious environment of the time caused many families to board ships for distant British colonies in the hopes of finding land and opportunity, and escaping persecution. The voyages were expensive, crowded, and difficult, though, and many arrived in North America sick, starved, and destitute. Those who did make it, however, were greeted with greater opportunities and freedoms that they could have experienced at home. Many of those families went on to make important contributions to the young nations in which they settled. Early immigration records have shown some of the first Haymans to arrive on North American shores:

Hayman Settlers in United States in the 17th Century

Hayman Settlers in United States in the 18th Century

Hayman Settlers in United States in the 19th Century

Hayman Settlers in Canada in the 18th Century

Hayman Settlers in Australia in the 19th Century

Hayman Settlers in New Zealand in the 19th Century

Hayman Settlers in West Indies in the 17th Century