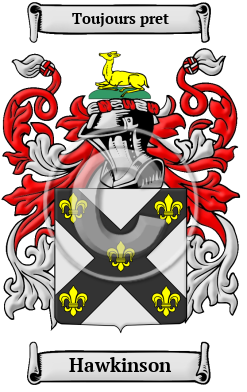 Hawkinson is a name that dates far back into the mists of early British history to the days of the Anglo-Saxon tribes. It is derived from the Old English personal name Hafoc, which continued to be in use until the 13th century. The surname Hawkinson was originally derived from the form Havec and the addition of the diminutive suffix -in, which forms Havek-in. The name Hawkinson has also been popularly regarded as a pet form of the personal name Henry.

Early Origins of the Hawkinson family

The surname Hawkinson was first found in Kent at Hawkinge or Hackynge, a parish in the union of Elham, hundred of Folkestone which dates back to at least 1204 when it was listed as Hauekinge and literally meant "place frequented by hawks" or "place of a man called Hafoc", derived from the Old English personal name "hafac" + ing. [1]

Early History of the Hawkinson family

It is only in the last few hundred years that the English language has been standardized. For that reason, early Anglo-Saxon surnames like Hawkinson are characterized by many spelling variations. As the English language changed and incorporated elements of other European languages, even literate people changed the spelling of their names. The variations of the name Hawkinson include: Hawkins, Hawkin, Haykins, Haykin and others.

Distinguished members of the family include Sir John Hawkins or Hawkyns (1532-1595), English admiral, second son of William Hawkyns (d. 1553), leader of the Sea Dogs, knighted after he commanded the "Victory" in the defeat of the Spanish Armada (1588) [6] His only son, Sir Richard Hawkins or Hawkyns (1562?-1622), was a British Naval Commander and was brought up almost from infancy among ships and seamen, whether at Plymouth or Deptford. [6] William Hawkins of Hawkyns (d. 1554?), was a sea-captain and merchant, son of John Hawkyns of Tavistock (d. before 1490.) [6] William Hawkins or Hawkyns (d. 1589), was a sea-captain and merchant...
Another 168 words (12 lines of text) are included under the topic Early Hawkinson Notables in all our PDF Extended History products and printed products wherever possible.

In the United States, the name Hawkinson is the 9,126th most popular surname with an estimated 2,487 people with that name. [7]

Migration of the Hawkinson family to Ireland

Some of the Hawkinson family moved to Ireland, but this topic is not covered in this excerpt.
Another 66 words (5 lines of text) about their life in Ireland is included in all our PDF Extended History products and printed products wherever possible.

Hawkinson migration to the United States +

Many English families tired of political and religious strife left Britain for the new colonies in North America. Although the trip itself offered no relief - conditions on the ships were extremely cramped, and many travelers arrived diseased, starving, and destitute - these immigrants believed the opportunities that awaited them were worth the risks. Once in the colonies, many of the families did indeed prosper and, in turn, made significant contributions to the culture and economies of the growing colonies. An inquiry into the early roots of North American families has revealed a number of immigrants bearing the name Hawkinson or a variant listed above:

Hawkinson Settlers in United States in the 17th Century

Hawkinson Settlers in United States in the 19th Century

Hawkinson Settlers in United States in the 20th Century