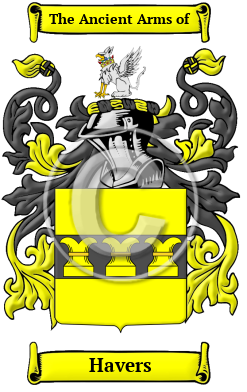 The name Havers is an ancient Anglo-Saxon name that was given to a person who was a person associated with a male goat, perhaps through ownership of such an animal or a perceived physical or temperamental resemblance to that animal. The surname Havers is derived from the Old English word hæfer, which means he-goat. [1] [2]

Early Origins of the Havers family

Early History of the Havers family

Notables of the family at this time include Clopton Havers (1657-1702), an English physician and pioneer on the microstructure of bone, believed to have been the first person to observe the eponymous Haversian canals and Sharpey's fibres in bones. "He studied at Catharine Hall, Cambridge, but left the university without taking any degree. He was admitted extra-licentiate of the College of Physicians of London on 28 July 1684, took the degree of M.D. at Utrecht...
Another 74 words (5 lines of text) are included under the topic Early Havers Notables in all our PDF Extended History products and printed products wherever possible.

Havers migration to the United States +

To escape the unstable social climate in England of this time, many families boarded ships for the New World with the hope of finding land, opportunity, and greater religious and political freedom. Although the voyages were expensive, crowded, and difficult, those families that arrived often found greater opportunities and freedoms than they could have experienced at home. Many of those families went on to make significant contributions to the rapidly developing colonies in which they settled. Early North American records indicate many people bearing the name Havers were among those contributors:

Havers Settlers in United States in the 19th Century

Havers Settlers in Australia in the 19th Century

Havers Settlers in New Zealand in the 19th Century