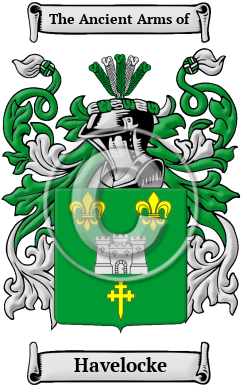 Early Origins of the Havelocke family

The family of the greatest hero of his age, the late Gen. Sir Henry Havelock, claimed to be of Danish extraction, having been, according to tradition, a scion of an ancient race descended from Guthrun, the historical Viking of the days of Alfred, and settled at Great Grimsby from his time! There is indeed a tradition that town was so named from a merchant called Grime, who obtained great wealth and honour in consequence of his having brought up an exposed child called Haveloc, who, after having been scullion in the king's kitchen, turned out to be a Danish prince. The curious corporate seal of the town seems to have some allusion to the circumstance, as it bears the names of ' Grym' and ' Habloc; ' and one of the boundary marks of the corporation is known as ' Haveloc's Stone.' " [1]

"It has always been a rare surname in England, although now immortalized." [2]

Early rolls listed Haveloc c. 1210 in Cornwall and William, Robert Havelok in the Subsidy Rolls for Essex in 1327. [3]

After the Norman Conquest of England many of Duke William's rebellious Barons moved north. The border became a convenient no-man's land. Notable families such as the Percy, the Umfravilles and the Nevilles gathered many supporting clans around them. In the 16th century they became known as the 'unruly clans'. In that century, many of those clans drove their herds south, and they settled in Yorkshire and Lancashire.

Early History of the Havelocke family

This web page shows only a small excerpt of our Havelocke research. Another 112 words (8 lines of text) covering the years 1327, 1369 and 1858 are included under the topic Early Havelocke History in all our PDF Extended History products and printed products wherever possible.

Although the name, Havelocke, appeared in many references, from time to time, the surname was shown with the spellings Havelock, Havlock, Havilock, Havelocke, Havilok and many more.

More information is included under the topic Early Havelocke Notables in all our PDF Extended History products and printed products wherever possible.

Migration of the Havelocke family

Gradually becoming disenchanted with life in Ireland many of these uprooted families sailed aboard the armada of sailing ships known as the "White Sails" which plied the stormy Atlantic. These overcrowded ships often arrived with only 60 to 70% of their original passenger list, many dying of cholera, typhoid, dysentery or small pox. In North America, some of the first immigrants who could be considered kinsmen of the Havelocke family name Havelocke, or who bore a variation of the surname were the name represented in many forms and recorded from the mid 17th century in the great migration from Europe. Migrants settled in the eastern seaboard from Newfoundland, to Maine, to Virginia, the Carolinas, and to the islands..