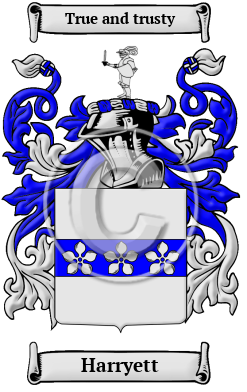 Early Origins of the Harryett family

The surname Harryett was first found in Midlothian where they held a family seat from early times and held the lands of Heriot, and were found there as early as c. 1164, when Henry of Heriot witnessed confirmation of the church of Karnewid (Carnwath) to Joceline, bishop of Glasgow.

Early History of the Harryett family

During the era when a person's name, tribe and posterity was one of his most important possessions, many different spellings were found in the archives examined. Harryett occurred in many references, and spelling variations of the name found included Herriot, Heriot, Harriet, Hariet, Herriott, Harriott and many more.

Notable amongst the family name during their early history was John of Heriot of Trabrown, Chief of the Clan in 1424. George Heriot (1563-1624), was a Scottish goldsmith and philanthropist. He was "founder of Heriot's Hospital, Edinburgh, was born in that city 15 June 1563. His father, George Heriot, who belonged to the old Haddingtonshire family, the Heriots of Trabourn, settled early as a goldsmith in Edinburgh, which he represented repeatedly in the Scotch parliament. The younger Heriot was brought up in the business of his father, who, on his marriage in 1586 to the daughter of a respectable Edinburgh tradesman, gave...
Another 143 words (10 lines of text) are included under the topic Early Harryett Notables in all our PDF Extended History products and printed products wherever possible.

Migration of the Harryett family

Gradually becoming disenchanted with life in Ireland many of these uprooted families sailed aboard the armada of sailing ships known as the "White Sails" which plied the stormy Atlantic. These overcrowded ships often arrived with only 60 to 70% of their original passenger list, many dying of illness and the elements, were buried at sea. In North America, early immigrants bearing the family name Harryett, or a spelling variation of the surname include: Mr. Harriet who settled in Charles Town [Charleston], South Carolina in 1820; Roger Harriet settled in South Carolina in 1822; Andreas Herriot who settled in Maryland in 1743.