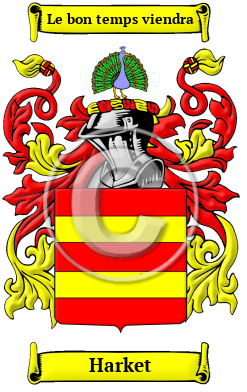 The name Harket was brought to England in the wave of migration that followed the Norman Conquest of 1066. The Harket family lived in Oxfordshire. Their name, however, refers not to this location, but to the family's place of residence prior to the Norman Conquest of England in 1066: one of two towns, Harcourt, in Calvados, Normandy, or Harcourt in Eure, Normandy. [1]

Another source provides more detail: "A town and ancient chateau, now in ruins, near Brionne in Normandy, which gave title to the French Ducs de Harcourt. The ancient earls of Harcourt played a distinguished part in the history of Normandy. They were descended from Bernard, of the blood-royal of Saxony, who having been born in Denmark was surnamed the Dane. He was chief counsellor and second in command to Rollo at the invasion of Neustria in A.D. 876, and acquired Harcourt and other fiefs for his eminent services." [2]

"Robert de Harcourt attended William I. to the Conquest of England, and his descendants possessed Stanton-Harcourt, co. Oxon, from 1166 to 1830, when the elder line became extinct." [3]

Early Origins of the Harket family

The surname Harket was first found in Oxfordshire. Errand de Harcourt who claimed descent from Bernard the Dane, who was granted the Lordship of Harcourt from Rollo of Normandy in 876 commanded the Archers of Vel de Ruel in the Conqueror's army. Rather than staying with his fellow countrymen in the newly conquered country, he returned to Normandy shortly after William's coronation. His younger Robert who had also accompanied him on the Conquest remained. Robert's son, William de Harcourt, a strong supporter of Henry I., commanded the troops that defeated the Earl of Mellentin in 1123. In return for his noble efforts, he received many more lands in England. [4]

This was the beginning of one of the most noble families in England that would quickly rise to the status of the House of Harcourt from which Simon, Lord Harcourt would become Lord Chancellor temp. Queen Anne.

Over in the parish of Wyrardisbury in Buckinghamshire, a more recent member of the family holds a piece of history. "Within its limits is Magna Charta island, a small islet in the Thames, on which King John, at the instance of the barons, is said by some to have signed the celebrated charter of English liberty; it is the property of G. Simon Harcourt, Esq., of Ankerwycke House, in the parish." [5]

William de Harewcurt was listed as an Old English Byname in 1055 and later, Philip de Harecourt was a Knights Templar in Sussex in 1139. [6]

Early History of the Harket family

Spelling variations in names were a common occurrence in the eras before English spelling was standardized a few hundred years ago. In the Middle Ages, even the literate regularly changed the spellings of their names as the English language incorporated elements of French, Latin, and other European languages. Many variations of the name Harket have been found, including Harcourt, Harcutt, Harker, Harkett and others.

Outstanding amongst the family at this time was Field Marshall Harcourt; and Sir Simon Harcourt, who was Lord Chancellor of England during the reign of George the I (1714-1727). Robert Harcourt (1574?-1631), was an English traveller, born about 1574 at Ellenhall, Staffordshire, was the eldest son of Sir Walter Harcourt of that place and Stanton Harcourt, Oxfordshire. "He matriculated at Oxford as a gentleman-commoner of St. Alban Hall on 10 April 1590, and continued there about three years. On 23 March 1609, accompanied by his brother Michael and a company of adventurers, he sailed for Guiana. On 11 May he arrived in...
Another 156 words (11 lines of text) are included under the topic Early Harket Notables in all our PDF Extended History products and printed products wherever possible.

Migration of the Harket family

For many English families, the social climate in England was oppressive and lacked opportunity for change. For such families, the shores of Ireland, Australia, and the New World beckoned. They left their homeland at great expense in ships that were overcrowded and full of disease. Many arrived after the long voyage sick, starving, and without a penny. But even those were greeted with greater opportunity than they could have experienced back home. Numerous English settlers who arrived in the United States and Canada at this time went on to make important contributions to the developing cultures of those countries. Many of those families went on to make significant contributions to the rapidly developing colonies in which they settled. Early North American records indicate many people bearing the name Harket were among those contributors: John Harcourt, who arrived in Jamaica in 1684; Edward Harcourt, who arrived in Texas in 1836; and Mary Harcourt, who settled in New England in 1773.