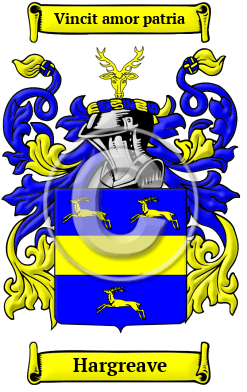 The ancient roots of the Hargreave family name are in the Anglo-Saxon culture. The name Hargreave comes from when the family lived in Hargrave, a place-name found in the counties of Cheshire, Northamptonshire, and Suffolk. There is also a Hargrave Hall in Cheshire. The place-name is derived from the Old English elements har, which meant "hare" or "on the border," and graf or græfe, which meant "grove." The place-name as a whole meant "grove filled with rabbits" or "grove on a border." [1]

Alternatively, the name could have been derived from a Saxon occupation, as "the provider or commissary of an army, from Here or Har, an army, and grave, a steward or disposer." [2]

"Hargreaves is an old Lancashire name. It is also common in the West Riding, particularly in the Leeds district. There are two Cheshire hamlets called Hargrave." [3]

Early Origins of the Hargreave family

The surname Hargreave was first found in Cheshire at Hargrave, which dates back to the Domesday Book of 1086 where it was listed as Haregrave. The Domesday Book also lists Haragrauna in Suffolk and Haregrave in Northamptonshire. [4]

The first record of the family was Geoffrey de Haregrave who was listed in the Pipe Rolls of Derbyshire in 1188. [5] A few years later, in the Hundredorum Rolls of 1273, John de Haregrave was listed as holding lands in Buckinghamshire at that time.

The Subsidy Rolls of Lancashire listed Henry de Hargreve in 1332. [5] This latter source notes that Hargreave Hall was located in Cheshire, but we can find no record of it today.

Early History of the Hargreave family

One relatively recent invention that did much to standardize English spelling was the printing press. However, before its invention even the most literate people recorded their names according to sound rather than spelling. The spelling variations under which the name Hargreave has appeared include Hargrove, Hargreave, Hargreaves, Hargrave, Hargroves and many more.

Another 38 words (3 lines of text) are included under the topic Early Hargreave Notables in all our PDF Extended History products and printed products wherever possible.

Hargreave migration to the United States +

At this time, the shores of the New World beckoned many English families that felt that the social climate in England was oppressive and lacked opportunity for change. Thousands left England at great expense in ships that were overcrowded and full of disease. A great portion of these settlers never survived the journey and even a greater number arrived sick, starving, and without a penny. The survivors, however, were often greeted with greater opportunity than they could have experienced back home. These English settlers made significant contributions to those colonies that would eventually become the United States and Canada. An examination of early immigration records and passenger ship lists revealed that people bearing the name Hargreave arrived in North America very early:

Hargreave Settlers in United States in the 19th Century

Hargreave Settlers in Australia in the 19th Century

Hargreave Settlers in New Zealand in the 19th Century