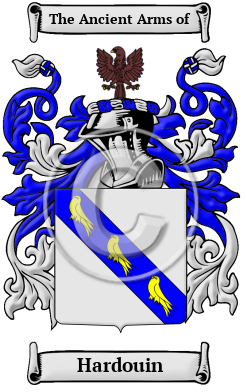 Early Origins of the Hardouin family

The surname Hardouin was first found in Roxburghshire where one of the first records of the name was "John de Hardene of the county of Roxburghe rendered homage [to King Edward I] in 1296." [2] In Scotland, the family claim Harden in Roxburghshire as their ancient homestead. Other early record list Ricaraus de Harden as selling a horse in 1312 and William of Harden was "custumar" of Dundee in 1359. [2]

Harden is a hamlet, in the parish of Bingley, union of Keighley, Upper division of the wapentake of Skyrack, in the West Riding of Yorkshire. [3]

One of the first records of the family was of Ricardus de Hareden who was listed in Wiltshire in the Hundredorum Rolls of 1273. The "Placita de Quo Warranto, temp. Edward I-III" listed Henry de Hardene in Norfolk, 20 Edward I (during the 20th year of Edward I's reign) and William de Hardene in Sussex.

The Yorkshire Poll Tax Rolls of 1379 had two listings of the family: Willelmus de Hardeyn; and Adam de Hardeyn. [4]

Early History of the Hardouin family

This web page shows only a small excerpt of our Hardouin research. Another 93 words (7 lines of text) covering the years 1296, 1512 and are included under the topic Early Hardouin History in all our PDF Extended History products and printed products wherever possible.

Although the name, Hardouin, appeared in many references, from time to time, the surname was shown with the spellings Harden, Hardene, Hardin, Hardon and others.

More information is included under the topic Early Hardouin Notables in all our PDF Extended History products and printed products wherever possible.

Migration of the Hardouin family to Ireland

Some of the Hardouin family moved to Ireland, but this topic is not covered in this excerpt.
Another 74 words (5 lines of text) about their life in Ireland is included in all our PDF Extended History products and printed products wherever possible.

Gradually becoming disenchanted with life in Ireland many of these uprooted families sailed aboard the armada of sailing ships known as the "White Sails" which plied the stormy Atlantic. These overcrowded ships often arrived with only 60 to 70% of their original passenger list, many dying of cholera, typhoid, dysentery or small pox. In North America, some of the first immigrants who could be considered kinsmen of the Hardouin family name Hardouin, or who bore a variation of the surname were

Hardouin Settlers in Canada in the 17th Century

Hardouin Settlers in Canada in the 18th Century