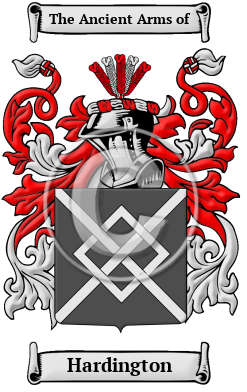 The Hardington name has descended through the generations from the ancient Anglo-Saxon culture. Their name comes from having lived at a local named Harrington, in Cumberland. Today, Harrington is on the Cumbrian coast with a population of about 5000. There is a small hamlet named Harrington in Lincolnshire and a small village and civil parish in Northamptonshire so named. The name was derived from the Old English Hoeferingtun which meant "settlement associated with Hoefer" or "settlement on stony ground". [1]

Early Origins of the Hardington family

Early History of the Hardington family

Migration of the Hardington family to Ireland

Some of the Hardington family moved to Ireland, but this topic is not covered in this excerpt. More information about their life in Ireland is included in all our PDF Extended History products and printed products wherever possible.

Hardington Settlers in New Zealand in the 19th Century