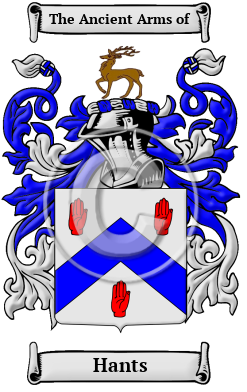 The name Hants is from the ancient Anglo-Saxon culture of the Britain and comes from the baptismal name for the son of John. The given name John was originally derived from the Dutch Hans or Han. [1]

Alternatively, the name coule be "a nickname or sign-name [Old English hand, a hand]." [2]

And another source notes it is an "ancient personal name. Hand and Hande are, however, surnames without prefix in Hundredorum Rolls. Mr. Ferguson says: "Walking through Handsworth in Staffordshire, and seeing the name of Hand upon the shops, I said to myself, ' Handsworth is the north or estate of a man called Hand, and these may be descendants of that man.'" [3]

Early Origins of the Hants family

The surname Hants was first found in Cheshire where the name first appeared as a forename in the Assize Rolls of 1288, Honde Cottrell. The Hundredorum Rolls of 1279 included Richard Hand in Bedfordshire and later Robert Hind was found in the Subsidy Rolls for Sussex in 1296. Walter Handes was listed in the Subsidy Rolls for Warwickshire in 1332. [4]

Early History of the Hants family

This web page shows only a small excerpt of our Hants research. Another 119 words (8 lines of text) covering the years 1200, 1521, 1588, 1594 and are included under the topic Early Hants History in all our PDF Extended History products and printed products wherever possible.

The first dictionaries that appeared in the last few hundred years did much to standardize the English language. Before that time, spelling variations in names were a common occurrence. The language was changing, incorporating pieces of other languages, and the spelling of names changed with it. Hants has been spelled many different ways, including Hand, Hands and others.

More information is included under the topic Early Hants Notables in all our PDF Extended History products and printed products wherever possible.

Migration of the Hants family to Ireland

Some of the Hants family moved to Ireland, but this topic is not covered in this excerpt.
Another 77 words (6 lines of text) about their life in Ireland is included in all our PDF Extended History products and printed products wherever possible.

Hants migration to the United States +

Thousands of English families in this era began to emigrate the New World in search of land and freedom from religious and political persecution. Although the passage was expensive and the ships were dark, crowded, and unsafe, those who made the voyage safely were rewarded with opportunities unavailable to them in their homeland. Research into passenger and immigration lists has revealed some of the very first Hantss to arrive in North America:

Hants Settlers in United States in the 18th Century

Hants Settlers in Australia in the 19th Century