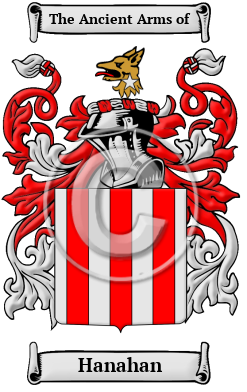 Throughout history, very few Irish surnames have exclusively maintained their original forms. Before being translated into English, Hanahan appeared as O Dubhain, where the name means a dark complexioned man. [1]

Early Origins of the Hanahan family

The surname Hanahan was first found in County Clare, County Limerick and Sligo (Irish: Sligeach), in the province of Connacht in Northwestern Ireland. Some of the County Clare families were thought to have been regionally in County Cork. [2]

O'Hart notes the family claims descent to the Heber line of ancient Irish kings through the O'Hara line. [1]

Early History of the Hanahan family

Just like the English language, the Gaelic language of Ireland was not standardized in the Middle Ages. Therefore, one's name was often recorded under several different spellings during the life of its bearer. Spelling variations revealed in the search for the origins of the Hanahan family name include Downs, Down, Downe, Downes and others.

Notable among the family name at this time was William Ducie (c. 1612-1679), created 1st Viscount Downe in 1675; Andrew Downes, also known as Dounaeus, (c.1549-1628), English classical scholar, one of the seven translators of the...
Another 35 words (2 lines of text) are included under the topic Early Hanahan Notables in all our PDF Extended History products and printed products wherever possible.

Hanahan Settlers in Australia in the 19th Century

Hanahan Settlers in New Zealand in the 19th Century