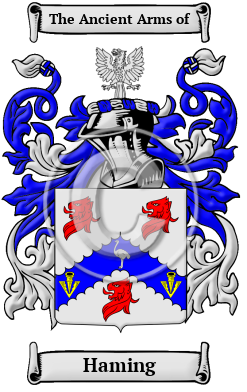 In the Middle Ages, Viking immigrants settled the shores of Scotland and named many places. The Haming name was then created from one of these place names. They lived in the Orkneys, where the family was found since the early Middle Ages.

Early Origins of the Haming family

The surname Haming was first found in the Orkneys, where "Hemming was one of the witnesses to the charter by King Duncan 11 to the monks of S. Cuthbert in 1094, the earliest Scottish charter." [1]

Early History of the Haming family

Intuition and sound were the primary sources medieval scribes used to judge appropriate spellings and translations for names. The spelling of a name thus varied according to who was doing the recording. The different spelling variations of Haming include Hemming, Heming, Hemming, Hemmings, Hemyng and others.

Notable amongst the Clan from early times was John Heminges (sometimes spelled Heming or Heminge) (1566-1630), an actor in the King's Men, the playing company for which William Shakespeare wrote. He was also co-editor of the First Folio, the collected plays of Shakespeare, published in 1623 and financial manager for the King's Men. A memorial statue of him can be found in London. William Heminges (1602-c.1653), also Hemminges, Heminge, and other variants, was a playwright and theatrical figure of the...
Another 79 words (6 lines of text) are included under the topic Early Haming Notables in all our PDF Extended History products and printed products wherever possible.

Migration of the Haming family

In their new home, Scots found land and opportunity, and some even fought for their new freedom in the American War of Independence. Some, who remained loyal to the crown went north to Canada as United Empire Loyalists. In this century, the ancestors of both of these groups have begun recovering their illustrious national heritage through Clan societies and other Scottish historical organizations. Early immigration and passenger lists indicate many people bearing the Haming name: Samuel Hemming settled in New England in 1698; Thomas Heming settled in Virginia in 1654; Joe Heming settled in Virginia in 1635.