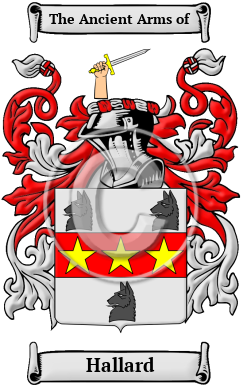 The origins of the Anglo-Saxon name Hallard come from its first bearer, who was a person considered to be brave and noble.

Early Origins of the Hallard family

The surname Hallard was first found in Norfolk and Northampton where they were recorded in the Domesday Book in 1086 when Adelard was an under tenant of lands at that time.

"Adelard of Bath was a 12th century writer on philosophy, of English birth, flourished about the beginning of the twelfth century. His English name was Æthelhard. His native place is said to have been Bath; but of the facts of his life little is known beyond the few references to travels contained in his own writings, and an entry in the Pipe Roll, 31 Henry I. " [1]

Early History of the Hallard family

This web page shows only a small excerpt of our Hallard research. Another 33 words (2 lines of text) are included under the topic Early Hallard History in all our PDF Extended History products and printed products wherever possible.

The first dictionaries that appeared in the last few hundred years did much to standardize the English language. Before that time, spelling variations in names were a common occurrence. The language was changing, incorporating pieces of other languages, and the spelling of names changed with it. Hallard has been spelled many different ways, including Aelheard, Adelard, Adlard and others.

More information is included under the topic Early Hallard Notables in all our PDF Extended History products and printed products wherever possible.

Hallard Settlers in Australia in the 19th Century