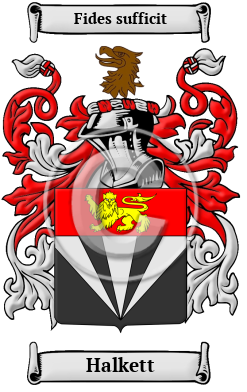 Early Origins of the Halkett family

The surname Halkett was first found in Fife, where they held a family seat in their territories. The Pictish influence on Scottish history diminished after Kenneth Macalpine became King of all Scotland. But those east coast families still played an important role in government and were more accessible to Government than their western highland counterparts.

Early History of the Halkett family

Notable amongst the Clan at this time was Lady Anne Halkett (née Murray) (1623-1699) English religious writer and autobiographer. She was "born in London 4 Jan. 1622, was the younger daughter of Thomas Murray, a cadet of the Tullibardine family, who had been appointed by James I tutor to his son Charles, and subsequently was provost of Eton College." [1] There were two Halkett Baronetcies, both in the Baronetage of Nova Scotia - one in 1662 for Charles Halkett and the other in 1697 for politician Peter Wedderburn, who changed his...
Another 90 words (6 lines of text) are included under the topic Early Halkett Notables in all our PDF Extended History products and printed products wherever possible.

Halkett migration to the United States +

Halkett Settlers in United States in the 20th Century