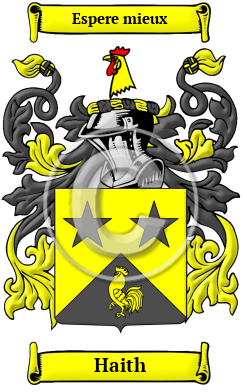 Haith is a name whose history is connected to the ancient Anglo-Saxon tribes of Britain. The name is derived from when the Haith family once lived on a heath, which is an area of level, uncultivated land with poor, coarse, undrained soil and rich deposits of peat or peaty humus. The surname Haith belongs to the class of topographic surnames, which were given to people who resided near physical features such as hills, streams, churches, or types of trees.

Early Origins of the Haith family

The surname Haith was first found in Durham where it was first listed as Atte-Hethe, Apud Hethe and Del la Hethe in the Rotuli Hundredorum of 1279. [1] The name was denoted for someone who lived on or by a heath, typically filled with heather. [2] Kirby's Quest for Somerset listed Adam atte Hethe and John atte Hethe during the reign of Edward III. [3]

Early History of the Haith family

Sound was what guided spelling in the essentially pre-literate Middle Ages, so one person's name was often recorded under several variations during a single lifetime. Also, before the advent of the printing press and the first dictionaries, the English language was not standardized. Therefore, spelling variations were common, even among the names of the most literate people. Known variations of the Haith family name include Heath, Hethe and others.

Notables of the family at this time include Sir Robert Heath (1575-1649), Attorney General of England, and founder of North Carolina and South Carolina. He was the son of Robert Heath of Brasted, Kent, a member of the Inner Temple and was born at Brasted on 20 May 1575. [5] James Heath (1629-1664), was a historian, son of Robert Heath, the king's cutler, who lived in the Strand, was born in London in 1629, and educated in Westminster School. [5] Thomas Heath ( fl. 1583), was an English mathematician, born in London and was admitted probationer fellow of All Souls, Oxford, in 1567. [5] John...
Another 129 words (9 lines of text) are included under the topic Early Haith Notables in all our PDF Extended History products and printed products wherever possible.

In the United States, the name Haith is the 9,022nd most popular surname with an estimated 2,487 people with that name. [6]

Migration of the Haith family to Ireland

Some of the Haith family moved to Ireland, but this topic is not covered in this excerpt. More information about their life in Ireland is included in all our PDF Extended History products and printed products wherever possible.

Migration of the Haith family

For political, religious, and economic reasons, thousands of English families boarded ships for Ireland, Canada, the America colonies, and many of smaller tropical colonies in the hope of finding better lives abroad. Although the passage on the cramped, dank ships caused many to arrive in the New World diseased and starving, those families that survived the trip often went on to make valuable contributions to those new societies to which they arrived. Early immigrants bearing the Haith surname or a spelling variation of the name include: William Heath settled in New England in 1620; later moving to Boston in 1632; Amory, Henry, Isaac, Jane, John, Margaret, Mary, Nicholas, Thomas and William Heath, all settled in Virginia between 1640 and 1680.