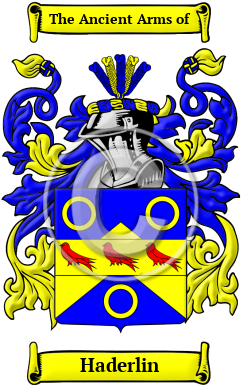 The ancient roots of the Haderlin family name are in the Anglo-Saxon culture. The name Haderlin comes from when the family lived in Hadleigh or Hadley, a place-name found in numerous locations in England. The root of these names is common, however; they are all derived from the Old English roots hæth and leah, which taken together mean "forest clearing where the heather grows." [1]

Early Origins of the Haderlin family

The surname Haderlin was first found in Essex at Hadleigh, a parish, in the union and hundred of Rochford. [2]

Over in Suffolk, Hadleigh was a market-town and parish, in the union and hundred of Cosford. "This town, which was probably founded during the heptarchy, about which period a monastery is said to have been established by one of the Saxon kings, was called by the Anglo-Saxons Headlege, whence it derived its modern name. Some of the kings of East Anglia were interred here; as also was Guthrum, or Gormo, a Danish chief, who submitted to Alfred the Great, and renounced paganism after the defeat of the Danes at the battle of Ethandune, now Eddington, in the county of Wilts: a tomb is still shown in the church as the monument of Guthrum (who died in 889)" [2]

"In Essex and Suffolk I find two parishes of Hadleigh, and in Middlesex a parish Hadley." [3] Another source notes: "Hædleáh in an Anglo-Saxon will of the 10th century." [4]

Early History of the Haderlin family

One relatively recent invention that did much to standardize English spelling was the printing press. However, before its invention even the most literate people recorded their names according to sound rather than spelling. The spelling variations under which the name Haderlin has appeared include Hadley, Hadleigh and others.

Notables of the family at this time include George Hadley (1685-1768), an English lawyer and amateur meteorologist, eponym of the Hadley cell and The Met Office Hadley Centre for Climate Change John Hadley (1682-1744), was an English mathematician, inventor of the octant and precursor to the sextant around 1730. Mons Hadley and Rima Hadley on the Moon are named after him. He was the son of George Hadley, deputy-lieutenant and afterwards, in 1691, High Sheriff of Hertfordshire. "He must be distinguished from an older John Hadley who was also skilled in practical mechanics." [6] John Hadley MD (1731-1764), the Professor of chemistry at...
Another 123 words (9 lines of text) are included under the topic Early Haderlin Notables in all our PDF Extended History products and printed products wherever possible.

Migration of the Haderlin family

At this time, the shores of the New World beckoned many English families that felt that the social climate in England was oppressive and lacked opportunity for change. Thousands left England at great expense in ships that were overcrowded and full of disease. A great portion of these settlers never survived the journey and even a greater number arrived sick, starving, and without a penny. The survivors, however, were often greeted with greater opportunity than they could have experienced back home. These English settlers made significant contributions to those colonies that would eventually become the United States and Canada. An examination of early immigration records and passenger ship lists revealed that people bearing the name Haderlin arrived in North America very early: George Hadley settled in Salem Massachusetts in 1630; David and John Hadley settled in Virginia in 1772; Martha Hadley arrived in Maryland in 1736; Mrs. R. Hadley arrived in San Francisco with her child in 1860..