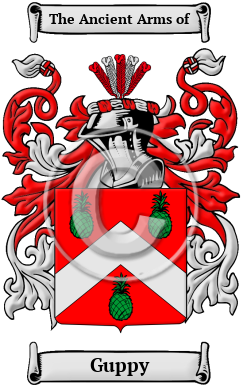 The distinguished Old English surname Guppy means "of Gopheye," and indicates someone who hails from the town of Gopheye in Dorset.

Early Origins of the Guppy family

The surname Guppy was first found in Dorset, at Guppy (formerly Guppehegh.)

Early History of the Guppy family

This web page shows only a small excerpt of our Guppy research. Another 384 words (27 lines of text) covering the years 1392, 1685, 1639, 1747, 1710 and 1763 are included under the topic Early Guppy History in all our PDF Extended History products and printed products wherever possible.

Distinguished members of the family include Lewis Goupy (d. 1747), French-born, English painter who went to London before 1710 , where he is said to have had a brother already resident as...
Another 31 words (2 lines of text) are included under the topic Early Guppy Notables in all our PDF Extended History products and printed products wherever possible.

Guppy migration to the United States +

Guppy Settlers in United States in the 18th Century

Guppy Settlers in United States in the 19th Century

Guppy Settlers in Canada in the 19th Century

Guppy Settlers in Australia in the 19th Century

Guppy Settlers in New Zealand in the 19th Century

Guppy Settlers in West Indies in the 17th Century

Historic Events for the Guppy family +