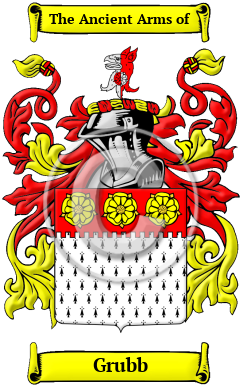 Early Origins of the Grubb family

The surname Grubb was first found in Berkshire, where the family was first referenced in the year 1176 when Richard and John Grubb held estates in that shire. [1]

Some of the family branched to Stoke Climsland, Cornwall where the family was recorded in 1329. This branch would later become Quakers and some of the first settlers to America.

One source disagrees with these early registers. "The family of Grubbe, spelt in the old registers as Grube or Groube, migrated from Germany about the year 1430, after the Hussite persecutions, and subsequently settled in the parish of Potterne, Wiltshire where they have ever since remained." [2]

We suggest that this may be one branch of the family as there are many records of the family before 1430, including the Hundredorum Rolls of 1273 which listed: John Grubbe in Norfolk; and Alan Grubbe in Cambridgeshire.

Early History of the Grubb family

Spelling variations of this family name include: Grubb, Grub, Grubbe, Groube, Groub and others.

Another 48 words (3 lines of text) are included under the topic Early Grubb Notables in all our PDF Extended History products and printed products wherever possible.

In the United States, the name Grubb is the 2,166th most popular surname with an estimated 14,922 people with that name. [4]

Migration of the Grubb family to Ireland

Some of the Grubb family moved to Ireland, but this topic is not covered in this excerpt.
Another 64 words (5 lines of text) about their life in Ireland is included in all our PDF Extended History products and printed products wherever possible.

Grubb migration to the United States +

Grubb Settlers in United States in the 17th Century

Grubb Settlers in United States in the 18th Century

Grubb Settlers in Canada in the 18th Century

Grubb Settlers in Australia in the 19th Century

Grubb Settlers in New Zealand in the 19th Century

Grubb Settlers in West Indies in the 17th Century

Suggested Readings for the name Grubb +