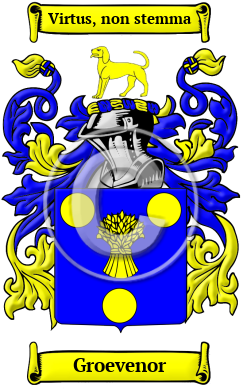 Groevenor is a name that first reached England following the Norman Conquest in 1066. It is a name for a person in charge of hunting on the Lord's estates. Further research showed the name was derived from the Anglo Norman French gros, which means great, or chief, and veneor, which means hunter, collectively "the chief or royal huntsman." [1] [2]

"This noble house [Westminster] traces its descent in the male line to a family which is stated to have flourished in Normandy for a century and a half before the conquest of England, and obtained its surname from having held the high and powerful office, in that principality, of le Grovenour." [3]

Another source gives more details: "Le Gros Veneut- 'the great or chief hunter' - that office having been hereditary in the family under the dukes of Normandy. The family descend from an uncle of Rollo the founder of Normandy; and the first settler in England was Gilbert le Grosvenor, nephew of Hugh Lupus, earl of Chester, who was nephew of the Conqueror. This illustrious name is properly Latinized Magnus Venator, but sometimes, absurdly, De Grosso Venatore." [2]

"The ancient seat of the Le Venours appears to have been Venables, near Evreux. Three brothers of this family came to England with Hugh Lupus: 1. Gislebert Venator, or De Venables, ancestor of the barons of Kinderton, of whom Gislebert Venables of Cheshire is mentioned in Normandy 1180 as 'Gislebert Venator' (Magni Rotuli Scaccarii Normanniae). The French line of Le Venur, descended from him." [4]

Sir Robert Grosvenor (d. 1396), the English knight, was the "defendant in the case of Scrope and Grosvenor, having descended from Gilbert le Grosvenor, nephew of Hugh Lupus, earl of Chester, in the time of William I. Sixth in descent from Gilbert was Sir Ralph Grosvenor of Hulme, Cheshire, who died in or before 1357, leaving his son Robert under age. " [5]

Early Origins of the Groevenor family

The surname Groevenor was first found in Lancashire where Robert le gros Venour was listed c. 1200. [6]

"Robert Grosvenor 1178 witnessed a charter of John, Constable of Chester, for Stanlaw Abbey. Ralph, his son, temp. John, was ancestor of the Grosvenors of Cheshire." [4]

Early History of the Groevenor family

Anglo-Norman names tend to be marked by an enormous number of spelling variations. This is largely due to the fact that Old and Middle English lacked any spelling rules when Norman French was introduced in the 11th century. The languages of the English courts at that time were French and Latin. These various languages mixed quite freely in the evolving social milieu. The final element of this mix is that medieval scribes spelled words according to their sounds rather than any definite rules, so a name was often spelled in as many different ways as the number of documents it appeared in. The name was spelled Grosvenor, Grosvener and others.

Migration of the Groevenor family

Because of the political and religious discontent in England, families began to migrate abroad in enormous numbers. Faced with persecution and starvation at home, the open frontiers and generally less oppressive social environment of the New World seemed tantalizing indeed to many English people. The trip was difficult, and not all made it unscathed, but many of those who did get to Canada and the United States made important contributions to the young nations in which they settled. Some of the first North American settlers with Groevenor name or one of its variants: John Grosvenor who settled in New England in 1630; Louis Grosvernor settled in Boston in 1822; E.C. Grosvenor settled in Savannah, Georgia in 1826.