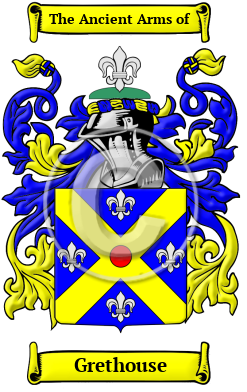 The Grethouse surname comes from the Old English words "great" or "large" and "heafod," meaning "head." It is supposed that this was originally a nickname for someone with a large head, which was later taken on as a surname. [1]

Early Origins of the Grethouse family

The surname Grethouse was first found in Berkshire where John Gretheved was listed in 1278. Later Thomas Gretehed was listed as Whitby, Yorkshire in 1351. [2]

Early History of the Grethouse family

Distinguished members of the family include Rev. Samuel Stephenson Greatheed, born in Somersetshire on Feb. 22, 1813. He received his first instruction in harmony from Mr. W. Chappell Ball, organist of St. Mary's, Taunton. In 1831 he entered at Trinity College...
Another 40 words (3 lines of text) are included under the topic Early Grethouse Notables in all our PDF Extended History products and printed products wherever possible.

Migration of the Grethouse family