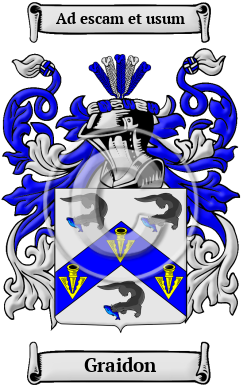 Early Origins of the Graidon family

The surname Graidon was first found in Berwickshire an ancient county of Scotland, presently part of the Scottish Borders Council Area, located in the eastern part of the Borders Region of Scotland, where they held a family seat on the English/Scottish border. After the Norman Conquest of England many of Duke William's rebellious Barons moved north. The border became a convenient but turbulent no-man's land where the persecuted Many were given land by King Malcolm Canmore and later by King David of Scotland. Some were native Scots. In the 16th century they became known as the 'unruly clans'. The name was first recorded in Scotland in the lands of Graden near Coldstream.

Early History of the Graidon family

This web page shows only a small excerpt of our Graidon research. Another 85 words (6 lines of text) covering the years 1288, 1296, 1650, 1704 and 1711 are included under the topic Early Graidon History in all our PDF Extended History products and printed products wherever possible.

More information is included under the topic Early Graidon Notables in all our PDF Extended History products and printed products wherever possible.

Migration of the Graidon family to Ireland

Some of the Graidon family moved to Ireland, but this topic is not covered in this excerpt. More information about their life in Ireland is included in all our PDF Extended History products and printed products wherever possible.

Migration of the Graidon family

Some of the first settlers of this family name or some of its variants were: Many settlers were recorded from the mid 17th century in the great migration from Europe to the New World. Migrants settled in the eastern seaboard from Newfoundland, Nova Scotia, to Maine, to Florida, and to the Leeward islands..