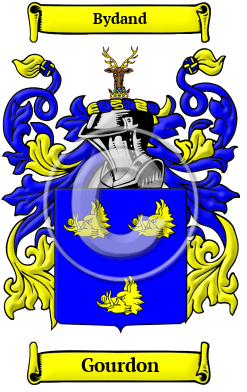 The history of the Gourdon family begins in the Boernician tribes of ancient Scotland. The Gourdon family lived on the lands of Gordon, in the former county of Berwickshire, since ancient times. There is little doubt that bearers of Gourdon came to Britiain with the Normans, and it is generally thought that they descend from the place named "Gourdon" in Saone-et-Loire, Normandy, but the oldest roots of the bearers of Gourdon in Scotland may lie with the Boernician tribe of ancient Scotland. It is entirely possible that the Gourdon surname was created from a pre-existing place name Gordon. It has been suggested that this place-name was originally derived from the Welsh (ancient Brithonic) words, gor and din, which mean "spacious" and "fort," and such, Gourdon would be a type hereditary surname, known as a habitation name: one that is derived from a pre-exiting name for a town, village, parish, or farmstead.

Early Origins of the Gourdon family

The surname Gourdon was first found in Berwickshire an ancient county of Scotland, presently part of the Scottish Borders Council Area, located in the eastern part of the Borders Region of Scotland, where legend has it that they were granted lands by King Malcolm Ceanmore, successor to MacBeth, in 1057, thus placing bearers of the name in lowland Scotland, before the invasion of the Normans.

Early History of the Gourdon family

Before the first dictionaries and printing presses went into use in the last few hundred years, spelling, particularly of names, was a largely intuitive matter. Consequently, many spelling variations occur in even the simplest names from the Middle Ages. Gourdon has been spelled Gordon, Gordun, Gôrdon (Gaelic) and others.

Notable amongst the family name during their early history was Sir Adam de Gordon, Lord of Gordon (died 1402), 14th-century Scottish baron; Alexander Seton, 1st Earl of Huntly (died 1470) when he succeeded his father as Lord Gordon he began using his mother's family name of Gordon, was knighted in 1439 and was Lord of Badenoch, Gordon, Strathbogie & Cluny and his son George Gordon, 2nd Earl of Huntly (died 1501) was a Scottish nobleman and Chancellor of Scotland from 1498-1501; George Gordon, 4th Earl of Huntly (1514-1562), Scottish nobleman, Lord High Chancellor in 1546 who led a revolt against Mary...
Another 129 words (9 lines of text) are included under the topic Early Gourdon Notables in all our PDF Extended History products and printed products wherever possible.

In France, the name Gourdon is the 1,091st most popular surname with an estimated 4,952 people with that name. [3]

Migration of the Gourdon family to Ireland

Some of the Gourdon family moved to Ireland, but this topic is not covered in this excerpt.
Another 77 words (6 lines of text) about their life in Ireland is included in all our PDF Extended History products and printed products wherever possible.

Gourdon migration to the United States +

The east coasts of the United States and Canada are still populated by many of the descendents of the Boernician-Scottish families who made that great crossing. They distributed themselves evenly when they first arrived, but at the time of the War of Independence those who remained loyal to England went north to Canada as United Empire Loyalists. This century, many of their ancestors have recovered their past heritage through highland games and other Scottish functions in North America. Many of these hardy settlers went on to make important contributions to the emerging nations in which they landed. Investigation of the origins of family names on the North American continent has revealed that many immigrants bearing the name Gourdon or a variant listed above:

Gourdon Settlers in United States in the 17th Century

Gourdon Settlers in Canada in the 17th Century

Gourdon Settlers in Canada in the 18th Century

Gourdon Settlers in West Indies in the 18th Century