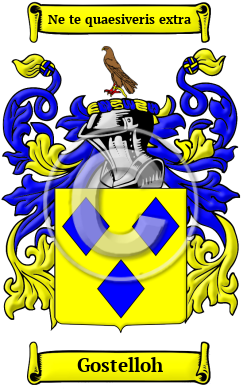 The Gostelloh surname came to Ireland with the Anglo-Norman invasion of the 12th century. They were originally from the Norman family Nangles, or de Angulos, and descended in Ireland from Gilbert de Nangle. Costello and associated variations come from the personal name of a son of Gilbert, Oisdealbhach, whose name consists of the elements "os," which means "deer or fawn", and "dealbhadh," which means "in the form of" or "resembling." The Gaelic form of the surname Gostelloh, which predated the Anglicized version of the name, is Mac Oisdealbhaigh. This is the earliest recorded example of a Norman family assuming a Mac surname. The prefix O has sometimes been erroneously assumed.

Early Origins of the Gostelloh family

The surname Gostelloh was first found in County Mayo (Irish: Maigh Eo) located on the West coast of the Republic of Ireland in the province of Connacht, where they were granted lands by the Earl of Pembroke in the Anglo-Norman invasion of 1172.

Early History of the Gostelloh family

Church officials and medieval scribes often simply spelled names as they sounded. As a result, a single person's name may have been recorded a dozen different ways during his lifetime. Spelling variations for the name Gostelloh include: Costello, MacCostello, Costillo, Costallo, Kostello, McCostello, Caustello, Costellow and many more.

Notable amongst the family up to this time was Guillauame Costeley (1531-1606), Scottish organist and 'valet du chambre du roy' to Henry II and Charles IX of France. [1] Arthur Dudley Costello (1803-1865), was an English-born Irish novelist and travel writer. William Costeley was a Scottish musician, born 1531, settled in France, and was organist to Henri II and Charles IX. Author of a treatise called...
Another 65 words (5 lines of text) are included under the topic Early Gostelloh Notables in all our PDF Extended History products and printed products wherever possible.

Migration of the Gostelloh family

The Irish emigration during the late 18th and 19th century contributed to the melting pot of nationalities in North America, and the building of a whole new era of industry and commerce in what was seen as a rich, new land. Ireland'sGreat Potato Famine resulted in the worst economic and social conditions in the island's history. And in response to the hunger, disease, and poverty, during this decade the total number of emigrants to leave for North America rivaled all the previous years combined. Those from this decade that arrived on North American shores were not warmly welcomed by the established population, but they were vital to the rapid development of the industry, agriculture, and infrastructure of the infant nations of the United States and what would become Canada. Research into early immigration and passenger lists has shown many people bearing the name Gostelloh: Honor Costello who landed in America in 1756; Bernard, Cornelius, Edward, Hugh, J.B. James, John, John B. Lawrence, Mark, Michael, Neal, Patrick, Peter, Philip, Thomas, Timothy, and William Costello, all landed in Philadelphia, Pennsylvania between 1833 and 1874.