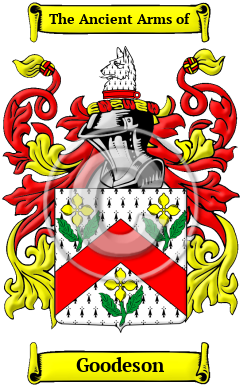 Early Origins of the Goodeson family

The surname Goodeson was first found in Norfolk at Gooderstone, a parish, in the union of Swaffham, hundred of South Greenhoe. "The church exhibits various stages of the English style, and has a square embattled tower; the nave is divided from the chancel by the remains of a beautifully carved screen, and on the south side of the chancel is a double piscina." [1]

Early History of the Goodeson family

Distinguished members of the family include Richard Goodson the Elder (d. 1718), English organist of New College and of Christchurch, Oxford. Richard Goodson the Younger (d. 1741), proceeded Mus. Bac. from Christchurch, Oxford, 1 March 1716; was organist at Christchurch and New College, and succeeded his...
Another 46 words (3 lines of text) are included under the topic Early Goodeson Notables in all our PDF Extended History products and printed products wherever possible.

Migration of the Goodeson family