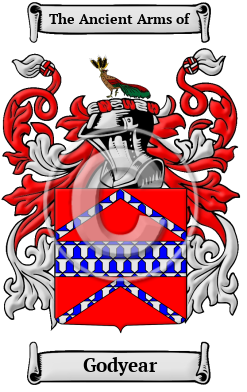 Godyear is one of the names carried to England in the great wave of migration from Normandy following the Norman Conquest in 1066. It is based on the given names Gudhir, or Gudvar, which were popular medieval names of Germanic origin. [1]

Another source notes that the name could have originated from the Middle English goodyeare, goodier, goodere, goodye(e)re meaning 'good year', as in "an expletive used in questions, 'What the good year?' Possibly elliptic for 'as I hope to have a good year' " [2]

The Domesday Book of 1086 has the first record of the family as Godere and Goderus (Latin). [3]

Early Origins of the Godyear family

The surname Godyear was first found in Huntingdonshire, where the Hundredorum Rolls of 1273 list Cest' Godyer. [4]

"Goodyear, which is now a Lincolnshire name, was represented 600 years ago by Godyer in the adjacent county of Huntingdonshire." [5]

John Godeyer, was listed in the Close Rolls, 10 Richard II (during the tenth year of Richard II's reign.)

The Yorkshire Poll Tax Rolls of 1379 listed Willelmus Goddeyere; Simon Godeycre, smyth; and Willelmus Godcyere as all holding lands there at that time. [4]

Charles Goodyear (1800-1860) the American inventor and patent holder of vulcanized rubber was born in New Haven, Connecticut. His father was a descendant of Stephen Goodyear (c. 1598-1658) born in London, who emigrated to New England during the Puritan Great Migration.

Early History of the Godyear family

Spelling variations in names were a common occurrence in the eras before English spelling was standardized a few hundred years ago. In the Middle Ages, even the literate regularly changed the spellings of their names as the English language incorporated elements of French, Latin, and other European languages. Many variations of the name Godyear have been found, including Goodyear, Goodier and others.

Outstanding amongst the family at this time was John Goodyer (1592-1664), a 17th century botanist who was known as "the ablest Herbalist now living in England." Samuel Goodere (1687-1741), was an English captain in the navy, the third and youngest son of Sir Edward Goodere, bart., of Burhope in Herefordshire, by his wife, daughter and heiress of Sir Edward Dineley, bart., of Charleton in Worcestershire, and on the mother's side granddaughter of Lewis Watson, first lord Rockingham. The eldest son having been killed in a duel, the second son, John Dineley, who had been brought up at sea in the merchant service...
Another 182 words (13 lines of text) are included under the topic Early Godyear Notables in all our PDF Extended History products and printed products wherever possible.

Migration of the Godyear family

For many English families, the social climate in England was oppressive and lacked opportunity for change. For such families, the shores of Ireland, Australia, and the New World beckoned. They left their homeland at great expense in ships that were overcrowded and full of disease. Many arrived after the long voyage sick, starving, and without a penny. But even those were greeted with greater opportunity than they could have experienced back home. Numerous English settlers who arrived in the United States and Canada at this time went on to make important contributions to the developing cultures of those countries. Many of those families went on to make significant contributions to the rapidly developing colonies in which they settled. Early North American records indicate many people bearing the name Godyear were among those contributors: Stephen Goodyear, a London merchant, who landed in New Haven in 1638. In 1641 he was appointed Deputy Governor of Connecticut. A. and W.B. Goodyear settled in San Francisco Cal. in 1850 and 1852 respectively.