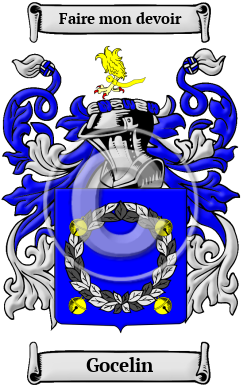 The history of name Gocelin began when it was derived from the Germanic personal name Jocelyn, meaning Goth.

Early Origins of the Gocelin family

The surname Gocelin was first found in Lanarkshire but one of the first records of the name was Josceline de Bohon (or Joscelyn fitz Richard de Bohon or Joscelin de Bohun) (c. 1111-1184) who was Bishop of Salisbury. His son, Reginald fitz Jocelin (sometimes Reginald Italus, Richard the Lombard, or Reginald Lombardus) was Bishop of Bath and an Archbishop of Canterbury-elect. Jocelin (or Jocelyn) (died 1199) was a twelfth-century Cistercian monk and cleric who became the 4th Abbot of Melrose and later Bishop of Glasgow, Scotland. Another branch was seated at Sempringham in Lincolnshire by grant of William the Conqueror. [2]

Early History of the Gocelin family

Notable amongst the family at this time was John Josselyn or Jastleyn (c.1490-1553), an English politician. Elizabeth Jocelin (1596-1623), was author of 'The Mother's Legacie to her Unborne Childe,' born in 1596, and was the daughter of Sir Richard Brooke of Norton, Cheshire, and his wife Joan. [1] Ralph Josselin (1616-1683) was an English vicar of Earls Colne in Essex...
Another 57 words (4 lines of text) are included under the topic Early Gocelin Notables in all our PDF Extended History products and printed products wherever possible.

Migration of the Gocelin family to Ireland

Some of the Gocelin family moved to Ireland, but this topic is not covered in this excerpt.
Another 94 words (7 lines of text) about their life in Ireland is included in all our PDF Extended History products and printed products wherever possible.

Migration of the Gocelin family

Some of the first settlers of this family name or some of its variants were: Henry Jocelyn settled in New Hampshire in 1630.