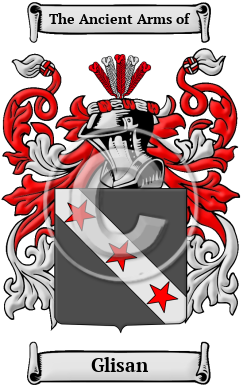 Many Irish names are merely English translations of Gaelic names. The name Glisan was a translation of the Gaelic name O Glasain or O Gliasain.

Early Origins of the Glisan family

The surname Glisan was first found in County Tipperary (Irish: Thiobraid Árann), established in the 13th century in South-central Ireland, in the province of Munster, where they held a family seat from very ancient times.

Early History of the Glisan family

The scribes and church officials of the Middle Ages who recorded names in official documents spelled the names as they sounded. This led to the problem of one name being recorded under several different variations and thus resembling more than one person. Among the many spelling variations of the surname Glisan that are preserved in archival documents of this era include Gleason, Gleeson, Glissane, Gleasone, Gleesone, Glissaun, Gleasaune, Glissen and many more.

Notable among the family name at this time was Francis Glisson (1597-1677), a British physician, anatomist, and writer on medical subjects. He was the second son of William Glisson of Rampisham in Dorsetshire. He entered at Caius College, Cambridge, in 1617, graduated B.A. 1621, and M.A...
Another 46 words (3 lines of text) are included under the topic Early Glisan Notables in all our PDF Extended History products and printed products wherever possible.

Migration of the Glisan family

During the middle of the 19th century, Irish families often experienced extreme poverty and racial discrimination in their own homeland under English rule. Record numbers died of disease and starvation, and many others, deciding against such a fate, boarded ships bound for North America. The largest influx of Irish settlers occurred with Great Potato Famine of the late 1840s. Unfortunately, many of those Irish that arrived in Canada or the United States still experienced economic and racial discrimination. Although often maligned, these Irish people were essential to the rapid development of these countries because they provided the cheap labor required for the many canals, roads, railways, and other projects required for strong national infrastructures. Eventually the Irish went on to make contributions in the less backbreaking and more intellectual arenas of commerce, education, and the arts. Research early immigration and passenger lists revealed many early immigrants bearing the name Glisan: Thomas Gleason who settled in Boston Massachusetts in 1762; followed by John in 1766; Nelly Gleeson settled in Canada in 1840; Martin Gleeson settled in New York in 1850.