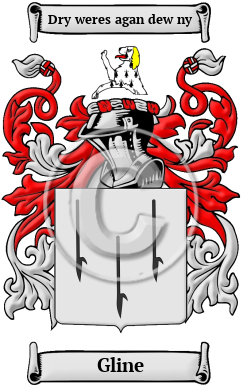 The illustrious surname Gline finds its origin in the rocky, sea swept coastal area of southwestern England known as Cornwall. Although surnames were fairly widespread in medieval England, people were originally known only by a single name. The process by which hereditary surnames were adopted is extremely interesting. As populations grew, people began to assume an extra name to avoid confusion and to further identify themselves. Under the Feudal System of government, surnames evolved and they often reflected life on the manor and in the field. Lords and their tenants often became known by the name of the feudal territory they owned or lived on. Unlike most Celtic peoples, who favored patronymic names, the Cornish predominantly used local surnames. This was due to the heavy political and cultural influence of the English upon the Cornish People at the time that surnames first came into use. Local surnames were derived from where a person lived, held land, or was born. While many Cornish surnames of this sort appear to be topographic surnames, which were given to people who resided near physical features such as hills, streams, churches, or types of trees, many are actually habitation surnames derived from lost or unrecorded place names. The name Gline is a local type of surname and the Gline family lived the son of Gerard. The surname Gline was originally derived from the Old German Gerhard which meant spear-brave. In Old English, patronyms were formed by adding a variety of suffixes to personal names, which changed over time and from place to place. For example, after the Norman Conquest, sunu and sune, which meant son, were the most common patronymic suffixes. In the 12th and 13th centuries, the most common patronymic names included the word filius, which meant son. By the 14th century, the suffix son had replaced these earlier versions. Surnames that were formed with filius or son were more common in the north of England and it was here that the number of individuals without surnames was greatest at this time.

Early Origins of the Gline family

The surname Gline was first found in Cornwall, where the Gline family held a family seat from very ancient times. The name was first recorded in 1100, when Hubert de Glin was living in the manor of Glynn near Bodmin, Cornwall. [1]

"The manor of Glynn belonged for many generations to an ancient family of this name; but in the early part of the fourteenth century, the elder branch becoming extinct, it was carried by an heiress from the Glynns to the Carminows. In this family it remained until it was purchased by the descendant of a younger branch of the Glynn family, its ancient possessors, some time before the days of Charles I." [2]

"John Dinham, Baron Dinham of Cardinham's estates was sold, with the exception of certain lands, to Dennis Glynn, Esq. the ancestor of E. J. Glynn, Esq. who with some few exceptions, now inherits the whole of the manor of Cardinham. Glynn, the delightful mansion of Edmund John Glynn, Esq. is situated on a gentle eminence that commands an extensive portion of that lovely vale, through which the river Foy flows towards Lostwithiel. De Glynn, who for many generations flourished here in a worshipful degree. It appears from the authority of Doomsday Survey, to have been simply called Glynn; the addition of ford must therefore have been made when the bridge was erected, in which connexion only it can be applied. Mr. Hals says, that Nicholas Glynn, Esq. of Glynford, was sheriff of Cornwall in the reign of James I." [2]

Early History of the Gline family

Cornish surnames are characterized by a multitude of spelling variations. The frequent changes in surnames are due to the fact that the Old and Middle English languages lacked definite spelling rules. The official court languages, which were Latin and French, were also influential on the spelling of a surname. Since the spelling of surnames was rarely consistent in medieval times, and scribes and church officials recorded names as they sounded rather than adhering to any specific spelling rules, it was common to find the same individual referred to with different spellings of their surname in the ancient chronicles. Moreover, a large number of foreign names were brought into England, which accelerated and accentuated the alterations to the spelling of various surnames. Lastly, spelling variations often resulted from the linguistic differences between the people of Cornwall and the rest of England. The Cornish spoke a unique Brythonic Celtic language which was first recorded in written documents during the 10th century. However, they became increasingly Anglicized, and Cornish became extinct as a spoken language in 1777, although it has been revived by Cornish patriots in the modern era. The name has been spelled Glynn, Glynne, Glinn, Glyn, Glin and others.

Migration of the Gline family to Ireland

Some of the Gline family moved to Ireland, but this topic is not covered in this excerpt. More information about their life in Ireland is included in all our PDF Extended History products and printed products wherever possible.

Migration of the Gline family

An investigation of the immigration and passenger lists has revealed a number of people bearing the name Gline: Bryan Glynn, who settled in Virginia in 1635; as did Morris Glyn in 1653; Anne Glyn, who arrived in New England in 1721; Henry Glyn, who came to Pennsylvania in 1753.