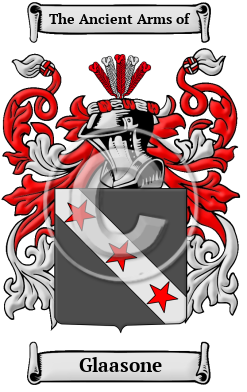 Many Irish names are merely English translations of Gaelic names. The name Glaasone was a translation of the Gaelic name O Glasain or O Gliasain.

Early Origins of the Glaasone family

The surname Glaasone was first found in County Tipperary (Irish: Thiobraid Árann), established in the 13th century in South-central Ireland, in the province of Munster, where they held a family seat from very ancient times.

Early History of the Glaasone family

Ireland in the Middle Ages was inhabited by very few literate people. Therefore, the proper spelling of names was decided by a very select few. The surviving records for the time demonstrate that these scribes were often not consistent in their efforts for there are many spelling variations of certain common names. Some of the variations for the name Glaasone include Gleason, Gleeson, Glissane, Gleasone, Gleesone, Glissaun, Gleasaune, Glissen and many more.

Notable among the family name at this time was Francis Glisson (1597-1677), a British physician, anatomist, and writer on medical subjects. He was the second son of William Glisson of Rampisham in Dorsetshire. He entered at Caius College, Cambridge, in 1617, graduated B.A. 1621, and M.A...
Another 46 words (3 lines of text) are included under the topic Early Glaasone Notables in all our PDF Extended History products and printed products wherever possible.

Migration of the Glaasone family

Many Irish families did not fare so well within the English-ruled Ireland. Besides racial and religious discrimination, many families were renting out small tracts of farmland from absentee landowners at often unreasonable rates. Beginning in the late 18th century, moderately well off Irish families decided to emigrate to British North America or the United States in order to own their own plot of land. A radical change occurred in the 1840s, however, with the Great Potato Famine of the 1840s. Up to this point, the island's population had been increasing rapidly and a steady demand over the years for grain crops had depleted soil. Two failed crops and one poor one caused widespread disease and starvation. Thousands boarded ships looking for opportunities elsewhere. North America welcomed them as a source of cheap labor required for the many industrial and infrastructure projects underway, and as a means to quickly occupy the western regions. Research into immigration and passenger ship lists indicates that people bearing the name Glaasone were among the earliest settlers to arrive in North America: Thomas Gleason who settled in Boston Massachusetts in 1762; followed by John in 1766; Nelly Gleeson settled in Canada in 1840; Martin Gleeson settled in New York in 1850.