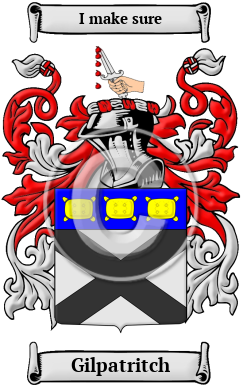 The Gilpatritch surname is derived from one of various place names in Scotland. These place names come from the Old Norse "kirkja" which became "kirk" and means "church." Several churches were dedicated to St. Patrick, and then the place names followed from the church names.

Early Origins of the Gilpatritch family

The surname Gilpatritch was first found in Dumfriesshire at Closeburn, a civil parish. The surname was derived from a chapel on a farm in the parish that was once dedicated to Saint Patrick. About 1 km east of Closeburn lies Closeburn Castle, a tower house that was the family seat of the Kirkpatrick family until 1783. The first record of the name is of a Sir Roger de Kirkpatrick (born c. 1280), 3rd cousin and associate of Robert the Bruce, 1st cousin of Sir William Wallace who attested a charter by one of the Bruces in the 14th century.

Early History of the Gilpatritch family

Spelling variations of this family name include: Kilpatrick, Gilpatrick, Patrick, Kirkpatrick and others.

Notable amongst bearers of this family name during their early history was Sir Thomas Kirkpatrick, 1st Baronet (d. c. 1695) of Closeburn in the County of Dumfries, a Baronetage of Nova Scotia created for him on 26 March 1685; and...
Another 40 words (3 lines of text) are included under the topic Early Gilpatritch Notables in all our PDF Extended History products and printed products wherever possible.

Migration of the Gilpatritch family to Ireland

Some of the Gilpatritch family moved to Ireland, but this topic is not covered in this excerpt.
Another 90 words (6 lines of text) about their life in Ireland is included in all our PDF Extended History products and printed products wherever possible.

Migration of the Gilpatritch family