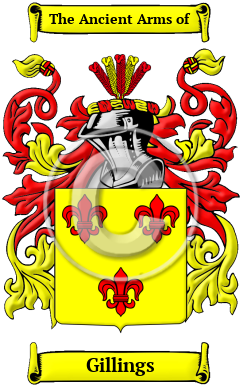 Early Origins of the Gillings family

The surname Gillings was first found in Yorkshire at either Gilling East or Gilling West, two villages that both date back to the Domesday Book of 1086. Gilling West is thought to be older as there are records of it Saxon times as Ingetlingum. [1]

Early History of the Gillings family

This web page shows only a small excerpt of our Gillings research. Another 87 words (6 lines of text) covering the years 1273, 1354, 1273, 1662, 1725 and 1712 are included under the topic Early Gillings History in all our PDF Extended History products and printed products wherever possible.

Outstanding amongst the family at this time was Isaac Gilling (1662?-1725), English Presbyterian minister, elder son of Richard Gilling, baker, born at Stogumber, Somersetshire. "Gilling, who was a scholarly and genial divine, kept a flourishing boarding-school at Newton Abbot, and got into...
Another 42 words (3 lines of text) are included under the topic Early Gillings Notables in all our PDF Extended History products and printed products wherever possible.

Gillings migration to the United States +

Gillings Settlers in United States in the 19th Century