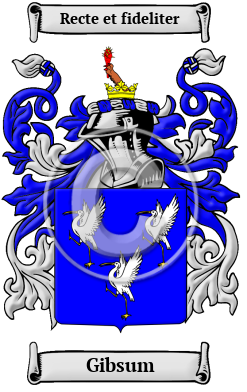 The age-old Hebrides islands and the west coast of Scotland are the ancestral home of the Gibsum family. Their name comes from the given name Gibb, which is a diminutive form of the name Gilbert. [1]

Early Origins of the Gibsum family

The surname Gibsum was first found in Galloway (Gaelic: Gall-ghaidhealaibh), an area of southwestern Scotland, now part of the Council Area of Dumfries and Galloway, that formerly consisted of the counties of Wigtown (West Galloway) and Kirkcudbright (East Galloway), where they held a family seat from very early times.

Early History of the Gibsum family

Medieval spelling was at best an intuitive process, and translation between Gaelic and English was no more effective. These factors caused an enormous number of spelling variations in Dalriadan names. In fact, it was not uncommon to see a father and son who spelled their name differently. Over the years, Gibsum has been spelled Gibson, Gibsone, Gibsons, Gipson, Gibsoun, Gipsone, Gibbson, Gibbsone, Gippson and many more.

Notable amongst the Clan from early times was Richard Gibson (1615-1690), known as "Dwarf Gibson", a painter of portrait miniatures and a court dwarf in England during the reigns of Charles I, Oliver Cromwell, Charles II and William and Mary; Sir John Gibson, of Alderstone, in Ratho parish, near Edinburgh; and his son, Sir John Gibson (ca. 1637-1717), founder of the Gloucestershire Regiment and Member of Parliament for Portsmouth, 1696-1698 and 1702. Thomas Gibson (d. 1562), was an English printer, medical practitioner, and theological writer and a native of Morpeth, Northumberland. Sir Alexander Gibson , Lord Durie (d. 1644), was a Scottish judge...
Another 151 words (11 lines of text) are included under the topic Early Gibsum Notables in all our PDF Extended History products and printed products wherever possible.

Migration of the Gibsum family to Ireland

Some of the Gibsum family moved to Ireland, but this topic is not covered in this excerpt.
Another 59 words (4 lines of text) about their life in Ireland is included in all our PDF Extended History products and printed products wherever possible.

Migration of the Gibsum family

Scottish settlers arrived in many of the communities that became the backbones of the United States and Canada. Many stayed, but some headed west for the endless open country of the prairies. In the American War of Independence, many Scots who remained loyal to England re-settled in Canada as United Empire Loyalists. Scots across North America were able to recover much of their lost heritage in the 20th century as Clan societies and highland games sprang up across North America. Early immigration and passenger lists have documented some of the first Gibsums to arrive on North American shores: Ann Gibson who settled in New England in 1635; Edward Gibson settled in Virginia in 1637; they also settled in Pennsylvania, New York, and Maryland in the 19th century. George Gibson settled in Fort Cumberland, Nova Scotia in 1774. In Newfoundland, Thomas Gibson settled in Tilton Harbour in 1823.