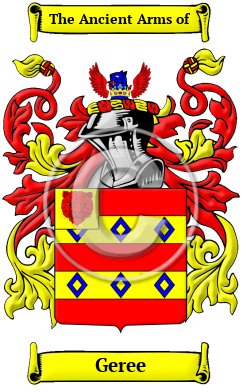 As we follow the name Geree back through history, we find that the surname is ultimately derived from the Middle English word "geary," meaning "changeable" or "passionate." [1]

Another source notes "This surname is derived from a geographical locality. 'at the gare' , from residence thereby." [2]

And another source states "Gear signifies all sorts of wearing apparel and equipments for horses and men, from the Saxon gearrian, to make ready; and the name was probably given to one who took charge of and superintended the gear. John of the Gear, John O' Gear, and at length John Gear." [3]

Early Origins of the Geree family

The surname Geree was first found in Suffolk, where the earliest record of the name is Albert, Joscelin Gere, who was listed in the "Cartularium monasterii de Rameseia" Rolls between 1133-1160. [1]

The Hundredorum Rolls of 1273 had only one listing of the family: Stephen de la Gare, Kent. But the "Placita de Quo Warranto, temp. Edward I-III." had two listings, both 20, Edward I (during the twentieth year of King Edward I's reign): Lucas atte Gare, Kent; and Lucas de la Gare, Kent. [2]

"There is an estate named Gear in the parish of St. Earth, which Polwhele thinks may have had its name from caer, castrum; and he says Gear Bridge below was originally Caer Bridge. Geare in Cornish signifies 'green or flourishing.' " [5]

Early History of the Geree family

Until quite recently, the English language has lacked a definite system of spelling rules. Consequently, Anglo-Saxon surnames are characterized by a multitude of spelling variations. Changes in Anglo-Saxon names were influenced by the evolution of the English language, as it incorporated elements of French, Latin, and other languages. Although Medieval scribes and church officials recorded names as they sounded, so it is common to find one person referred to by several different spellings of his surname, even the most literate people varied the spelling of their own names. Variations of the name Geree include Gear, Geare, Geear, Geere, Gere and others.

Notables of the family at this time include Sir Michael Geare (c. 1565 - ?), captain of the ship "Little John," who was knighted in for his role in the privateer wars in the West Indies with Spain in 1580-1603. Alan Geare (1622-1662), was a nonconformist divine, born at Stoke Fleming, near Dartmouth, Devonshire...
Another 53 words (4 lines of text) are included under the topic Early Geree Notables in all our PDF Extended History products and printed products wherever possible.

Migration of the Geree family

Searching for a better life, many English families migrated to British colonies. Unfortunately, the majority of them traveled under extremely harsh conditions: overcrowding on the ships caused the majority of the immigrants to arrive diseased, famished, and destitute from the long journey across the ocean. For those families that arrived safely, modest prosperity was attainable, and many went on to make invaluable contributions to the development of the cultures of the new colonies. Research into the origins of individual families in North America revealed records of the immigration of a number of people bearing the name Geree or a variant listed above: Thomas Geare, who came to Boston in 1635; George Gere, who also arrived Boston in 1635; Wm Gear, who came to Virginia in 1678; Solomon Gear, an 'emigrant in bondage,' who arrived in Boston in 1720.