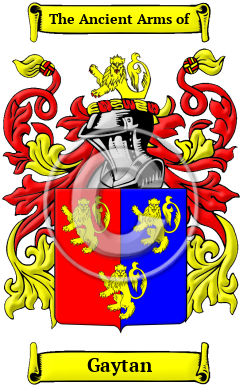 The history of the Gaytan family name begins after the Norman Conquest of 1066. They lived in various counties of England and later in Scotland. The name, however, refers to the family's residence near an important thoroughfare or main road. It derives from the Old English root gate, which means road or thoroughfare.

Early Origins of the Gaytan family

The surname Gaytan was first found in various counties of England and Scotland. The earliest record of the family was Ailricius de la Gata who was listed in the Pipe Rolls of Devon in 1169. [1]

The Hundredorum Rolls of 1273 list Hugh le Geyt in Oxfordshire and the Yorkshire Poll Tax Rolls of 1379 has numerous entries for the family: Johannes Gayte; Thomas de Gayte; Jonannes atte Gate; Robertus de Gate; and Custancia del Gates. Silvester atte Gates was rector of Brinton, Norfolk in 1354. [2] "Its medieval forms are Ate Gate and atte Gate, which have since the XV. cent. modified to Agate, Gater, and especially to Gates." [3]

Later a branch of the family was found in the parish of Knedlington in the East Riding of Yorkshire. "The old Hall [of Knedlington], a fine specimen of the Elizabethan style, was possessed by Sir John Gate, a distinguished knight in the reign of Henry VIII." [4]

And further to the north in Scotland, all of the entries and later typically showing a migration from England to Scotland. Patrick Gaittis was minister of Polwarth from 1593 to 1604. A seal dated 1605 reads "Master Patrik Gaittie, minister, vndoutit persone of the perochin and paroche kirk of dunce." In modern English, it translates as " S' Patricii Gait. Patrick Gaittis and James Gaittis were ministers of Duns from 1582 to 1611 and John Gaittis was minister of Bunkle from 1614 to 1640." [5] Black continues "Gate is common element in place names on both sides of the Border."

Early History of the Gaytan family

Anglo-Norman names are characterized by a multitude of spelling variations. When the Normans became the ruling people of England in the 11th century, they introduced a new language into a society where the main languages of Old and later Middle English had no definite spelling rules. These languages were more often spoken than written, so they blended freely with one another. Contributing to this mixing of tongues was the fact that medieval scribes spelled words according to sound, ensuring that a person's name would appear differently in nearly every document in which it was recorded. The name has been spelled Gate, Gates and others.

Outstanding amongst the family at this time was Bernard Gates (1685?-1773), English musician, the second son of Bernard Gates, gentleman, of St. Margaret's, Westminster, whose will was proved on 21 May 1718. His name appears in the list of children of the Chapel Royal in 1702. [6] Sir John Gates (1504?-1553), was an English statesman, born about 1504, was the eldest son of Sir Geoffrey Gates (d. 1526) by Elizabeth, daughter of William Clopton (Morant, Essex, ii. 146, 457). Henry VIII made him a gentleman of the privy chamber. In January 1535 he was placed on the committee for Essex and Colchester...
Another 223 words (16 lines of text) are included under the topic Early Gaytan Notables in all our PDF Extended History products and printed products wherever possible.

In the United States, the name Gaytan is the 4,937th most popular surname with an estimated 4,974 people with that name. [7]

Gaytan migration to the United States +

For many English families, the political and religious disarray that plagued their homeland made the frontiers of the New World an attractive prospect. Thousands migrated, aboard cramped disease-ridden ships. They arrived sick, poor, and hungry, but were welcomed in many cases with far greater opportunity than at home in England. Many of these hardy settlers went on to make important contributions to the emerging nations in which they landed. Among early immigrants bearing the name Gaytan or a variant listed above were:

Gaytan Settlers in United States in the 19th Century