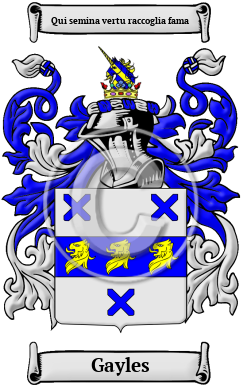 The origins of the Gayles surname date from the ancient Anglo-Saxon culture of Britain. Their name originated with an early member who was a person who was known for their cheerful personality and their jovial disposition. The surname Gayles was originally derived form the Old English word gal, which described a person as being pleasant and merry. [1]

Early Origins of the Gayles family

The surname Gayles was first found in Yorkshire where the Yorkshire Poll Tax Rolls of 1379 list Johanna del Gaylle; Agnes del Gaylle; Johannes del Gayle; and Willelmus Gayle as all holding lands there at that time. [2]

One source claims the name is a "Scottish Highlander," [3] and in Scotland, "strangers to the Gadhelic people were called Gall, and this gave rise to surnames such as Gauld, Gall, and the Lowland Galt. Gall in the common speech was pronounced 'Gaw.' A rather common surname in Perth and especially in the Muirton of Balhousie during the seventeenth and eighteenth centuries. John Gal was witness to a grant to the Blackfriars of Perth in 1334." [4]

Early History of the Gayles family

The English language only became standardized in the last few centuries; therefore, spelling variations are common among early Anglo-Saxon names. As the form of the English language changed, even the spelling of literate people's names evolved. Gayles has been recorded under many different variations, including Gale, Gail, Gaile, Gales and others.

Notables of the family at this time include George Gale, Mayor of York; Dunstan Gale (fl. 1596), an English poet, author of a poem entitled 'Pyramus and Thisbe,' supposed to have been printed for the first time in 1597. [5] Theophilus Gale (1628-1678), was an English educationalist, nonconformist and theologian of dissent from Kingsteignton, Devon; Thomas Gale (1635?-1702), an English classical scholar, antiquarian and cleric from Scruton, Yorkshire; Mildred Gale (1671-1701), born Mildred Warner in the Colony of Virginia, paternal grandmother of President George Washington; and John Gale (1680-1721), an English Baptist theologian; and his son...
Another 95 words (7 lines of text) are included under the topic Early Gayles Notables in all our PDF Extended History products and printed products wherever possible.

Migration of the Gayles family

For many English families, the political and religious disarray that shrouded England made the far away New World an attractive prospect. On cramped disease-ridden ships, thousands migrated to those British colonies that would eventually become Canada and the United States. Those hardy settlers that survived the journey often went on to make important contributions to the emerging nations in which they landed. Analysis of immigration records indicates that some of the first North American immigrants bore the name Gayles or a variant listed above: John Gale who settled in New England in 1656; another John settled in Virginia in 1623 with his wife Mary; Richard Gale settled in Barbados in 1635; John Gale settled in Barbados in 1685.