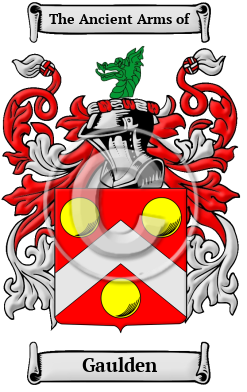 Gaulden is a name of Anglo-Saxon origin and came from the son of Goldwin. In Old English, patronyms were formed by adding a variety of suffixes to personal names, which changed over time and from place to place. For example, after the Norman Conquest, sunu and sune, which meant son, were the most common patronymic suffixes. In the 12th and 13th centuries, the most common patronymic names included the word filius, which meant son. By the 14th century, the suffix son had replaced these earlier versions. Surnames that were formed with filius or son were more common in the north of England and it was here that the number of individuals without surnames was greatest at this time.

Early Origins of the Gaulden family

The surname Gaulden was first found in Oxfordshire where the first two records of the family appear in the Hundredorum Rolls of 1273: Nicholas Goldin, Oxfordshire; and Thomas Goldine, Oxfordshire. The same rolls included Golding Palmarius, Kent; Hilde Golden, Cambridgeshire; and Hugo Golding, Suffolk. [1]

Changes between the different suffixes were common as "the family of Golden, Broad Chalke, Wiltshire, are entered Golding in 1563; Goulden, 1707; and Golden, 1672." [1]

Up in Scotland one of the family achieved notoriety of a different sort: "The rashness of a Scots soldier, Ralph Golding, at the bridge of Rokesburgh in 1333 led to Sir Andrew Moray of Bothwell, the Regent, being taken prisoner by the English." [2]

Early History of the Gaulden family

This web page shows only a small excerpt of our Gaulden research. Another 68 words (5 lines of text) covering the years 1273, 1559, 1688, 1776 and 1688 are included under the topic Early Gaulden History in all our PDF Extended History products and printed products wherever possible.

Spelling variations in names were a common occurrence before English spelling was standardized a few hundred years ago. In the Middle Ages, even the literate spelled their names differently as the English language incorporated elements of French, Latin, and other European languages. Many variations of the name Gaulden have been found, including Golden, Goldin, Goulden, Gouldin, Goulton and many more.

Another 42 words (3 lines of text) are included under the topic Early Gaulden Notables in all our PDF Extended History products and printed products wherever possible.

Migration of the Gaulden family to Ireland

Some of the Gaulden family moved to Ireland, but this topic is not covered in this excerpt.
Another 64 words (5 lines of text) about their life in Ireland is included in all our PDF Extended History products and printed products wherever possible.

Migration of the Gaulden family

Families began migrating abroad in enormous numbers because of the political and religious discontent in England. Often faced with persecution and starvation in England, the possibilities of the New World attracted many English people. Although the ocean trips took many lives, those who did get to North America were instrumental in building the necessary groundwork for what would become for new powerful nations. Among the first immigrants of the name Gaulden, or a variant listed above to cross the Atlantic and come to North America were : George Golden settled in Virginia in 1652; Thomas Golden settled in New York in 1820; Hannah, Hugh, James, John, Michael, Patrick, Thomas and William Golden, arrived in Philadelphia between 1840 and 1860.