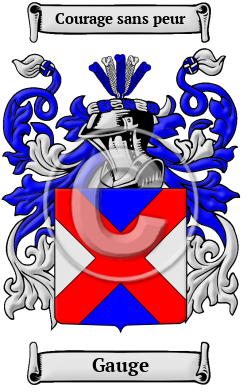 Gauge is a name of ancient Norman origin. It arrived in England with the Norman Conquest of 1066. The Gauge family lived person who worked as the local assayer, who would determine weights and measures. The surname has another occupational origin which suggests that the bearer worked as a money lender, which was taken from the Old French word gage, which literally means a pledge.

Early Origins of the Gauge family

The surname Gauge was first found in Gaugy, Normandy where Ralph de Gaugy was listed there in 1180. Various versions of the name were listed including Gauchi, Gaugi, and Gaacy in L'Aigle, Normandy about the same time. The first record on the name in England was Warin de Gaacy (Wacy) in Bedfordshire in 1140.

A few years later, Ralph de Gauchi (Gaugi) held a fief in Northumberland by marriage in 1165 and in the same year, Robert de Gaugi was Baron of Slesmouth, again in Northumberland. The latter's brother, Roger de Gauchi was granted the ownership of Argentan Castle and Forest by King John in 1203. [1]

The parish of Alciston in Sussex was another ancient family seat. "This manor was given, with others, to Battle Abbey by the Conqueror, whose grant was confirmed by Henry I.: on the surrender of the abbey, in 1539, the king became seised of the lordship, and gave it to Sir John Gage and Philippa his wife, to hold in capite by knight's service. Alciston Place was occupied by an ancestor of the present Lord Gage in 1585." [2]

At one time, Burstow, Surrey was another stronghold of the family. "Burstow-Court Lodge became, in the 15th century, the property of the Gages, of whom was Sir John Gage, K. G., a distinguished military officer in the reigns of Henry VIII. and Edward VI.; the family sold the property in 1613." [2]

Early History of the Gauge family

Endless spelling variations are a prevailing characteristic of Norman surnames. Old and Middle English lacked any definite spelling rules, and the introduction of Norman French added an unfamiliar ingredient to the English linguistic stew. French and Latin, the languages of the court, also influenced spellings. Finally, Medieval scribes generally spelled words according to how they sounded, so one person was often referred to by different spellings in different documents. The name has been spelled Gage, Gauge and others.

Outstanding amongst the family at this time was Sir John Gage (1479-1556), Vice Chamberlain of England to Henry VIII, who began the line of the Gage family of Firle Place; Thomas Gage (circa 1596-1656), English Catholic missionary who traveled in Mexico and Central America, and whose written accounts encouraged English exploration; Francis Gage (1621-1682), an English Roman Catholic priest, President of the English College, Douai; Sir...
Another 66 words (5 lines of text) are included under the topic Early Gauge Notables in all our PDF Extended History products and printed products wherever possible.

Migration of the Gauge family to Ireland

Some of the Gauge family moved to Ireland, but this topic is not covered in this excerpt.
Another 66 words (5 lines of text) about their life in Ireland is included in all our PDF Extended History products and printed products wherever possible.

Migration of the Gauge family

To escape the political and religious persecution within England at the time, many English families left for the various British colonies abroad. The voyage was extremely difficult, though, and the cramped, dank ships caused many to arrive in the New World diseased and starving. But for those who made it, the trip was most often worth it. Many of the families who arrived went on to make valuable contributions to the emerging nations of Canada and the United States. An inquiry into the early roots of North American families reveals a number of immigrants bearing the name Gauge or a variant listed above: John Gage, who arrived with Winthrop's Fleet in 1630 and settled in Boston; Elizabeth Gage, who settled in Virginia in 1652; John and William Gage, who came to Virginia in 1654.