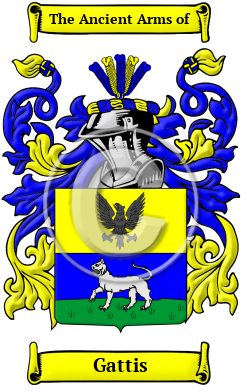 The distinguished surname Gattis originated in an area of Italy, known as the Papal States. Although people were originally known only by a single name, it became necessary for people to adapt a second name to identify themselves as populations grew and travel became more frequent. The process of adopting fixed hereditary surnames was not complete until the modern era, but the use of hereditary family names in Italy began in the 10th and 11th centuries. Italian hereditary surnames were developed according to fairly general principles and they are characterized by a profusion of derivatives coined from given names. Although the most traditional type of family name found in the region of the Papal States is the patronymic surname, which is derived from the father's given name, the nickname type of surname is also frequently found. Nickname surnames were derived from an eke-name, or added name. They usually reflected the physical characteristics or attributes of the first person that used the name. The surname Gattis came from a person who was agile, cunning or perhaps sly.

Early Origins of the Gattis family

The surname Gattis was first found in the city of Gaeta, with the noble Gattola family in 1091.

Early History of the Gattis family

This web page shows only a small excerpt of our Gattis research. More information is included under the topic Early Gattis History in all our PDF Extended History products and printed products wherever possible.

There are many variations of most of those Italian names that originated in the medieval era. Some of these come from regional differences, like the tradition of ending northern names in "o" and southern names in "i". Others come from inaccuracies in the recording process, which were extremely common in the eras before dictionaries standardized spelling. Some of the spelling variations of Gattis are Gatti, Gatto, Gatta, Gatte, Gattola, Gattinara, Gattamelata, Lo Gatto, La Gatta, Gattelli, Gattini, Gattoli, Gattolin, Gattulli, Gattullo, Gattai, Gattei, Gatteschi and many more.

Prominent among members of the family was Erasmo Gattamelata who was Commander of the Papal armies in 1431, and from this gained noble status in the Venetian Republic. Bernardino Gatti, a painter in Pavia around 1500, was known as "Il Solaro" and was dependent on famous painter Correggio for much of his style. Mercurino Gattinara was Grand Chancellor of Charles V and Count of Valenza, and in 1522 was made Duke of Milan by Francesco Sforza. He eventually became Bishop and then Cardinal. Simone Gatto was a Venetian composer...
Another 89 words (6 lines of text) are included under the topic Early Gattis Notables in all our PDF Extended History products and printed products wherever possible.

In the United States, the name Gattis is the 7,978th most popular surname with an estimated 2,487 people with that name. [1]

Migration of the Gattis family

Research into the origins of individual families in North America has revealed records of the immigration of a number of people bearing the name Gattis or a variant listed above: Antonio L.F. Gatte, who arrived in New York City in 1820 at the age of 17; Adamo Gatti, aged 38, who arrived at Ellis Island from Sandrio, Italy, in 1905.