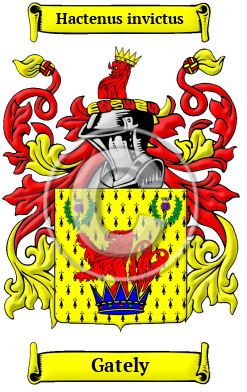 Gately is a name whose ancestors lived among the Picts, a tribe in ancient Scotland. The Gately family lived in some place which is now obscure. The surname Gately belongs to the category of habitation names, which are derived from pre-existing names for towns, villages, parishes, or farmsteads. [1]

Other sources claim the name is "a nickname for messenger, runner, [2] or "a messenger or runner [who] was fleet of foot." [3]

Early Origins of the Gately family

The surname Gately was first found in Perthshire (Gaelic: Siorrachd Pheairt) former county in the present day Council Area of Perth and Kinross, located in central Scotland, where they held a family seat from very ancient times, some say well before the Norman Conquest and the arrival of Duke William at Hastings in 1066 A.D.

Early History of the Gately family

This web page shows only a small excerpt of our Gately research. Another 79 words (6 lines of text) covering the years 1291, 1296, 1745, 1762, 1784 and 1789 are included under the topic Early Gately History in all our PDF Extended History products and printed products wherever possible.

The appearance of the printing press and the first dictionaries in the last few hundred years did much to standardize spelling. Prior to that time scribes spelled according to sound, a practice that resulted in many spelling variations. Gately has been spelled Galletly, Gallightly, Gellatly, Gellately, Gillatly, Golightly and many more.

Notable amongst the Clan at this time was Anne Catleyborn, born in 1745 in an alley near "Tower Hill, London of very humble parents, her father being a hackney coachman, and her mother a washerwoman. Endowed with great personal beauty, a charming voice, and a natural talent for singing, she gained her living at the early age of 10 years by singing in the public houses in the neighbourhood, and also for the diversion of the officers quartered in the Tower. When about 15 years of age she was...
Another 88 words (6 lines of text) are included under the topic Early Gately Notables in all our PDF Extended History products and printed products wherever possible.

In the United States, the name Gately is the 13,786th most popular surname with an estimated 2,487 people with that name. [4]

Gately migration to the United States +

The expense of the crossing to the North American colonies seemed small beside the difficulties of remaining in Scotland. It was a long and hard trip, but at its end lay the reward of freedom. Some Scots remained faithful to England and called themselves United Empire Loyalists, while others fought in the American War of Independence. Much of this lost Scottish heritage has been recovered in the last century through Clan societies and other patriotic Scottish organizations. A search of immigration and passenger lists revealed many important, early immigrants to North America bearing the name of Gately:

Gately Settlers in United States in the 17th Century

Gately Settlers in United States in the 19th Century

Gately Settlers in United States in the 20th Century

Gately Settlers in Canada in the 19th Century

Gately Settlers in Australia in the 19th Century

Historic Events for the Gately family +