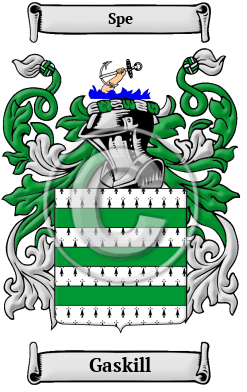 Early Origins of the Gaskill family

The surname Gaskill was first found in Westmorland, at Gaisgill, a "hamlet two miles from Tebay." [1] The village name literally meant " wild-goose valley." [2] Today the hamlet is amalgamated with Tebay in Cumbria.

In Scotland, where the name is now more popular, one of the first records was that of Thomas Gaskel, who was one of the witnesses in a dispute concerning lands of Monachkeneran in 1233. [3]

Early History of the Gaskill family

Spelling variations of this family name include: Gaskell, Gaskill, Gaitskill, Gaitskell and others.

Notable amongst the family at this time was Samuel Gaskell, a tanner at Newton Stewart in 1742. William Gaskell (1805-1884), Unitarian minister, eldest son of William Gaskell (d. 15 March 1819), sail-canvas manufacturer, was born at Latchford, near Warrington, on 24 July 1805. Of an old nonconformist family, he was early destined for the ministry. After studying at Glasgow, where he graduated M.A. in 1824, he was admitted in 1825 to Manchester College, York, being nominated by Thomas Belsham as a divinity student on the Hackney fund. Gaskell died at his residence, Plymouth Grove, Manchester, on 11 June 1884; he was buried...
Another 123 words (9 lines of text) are included under the topic Early Gaskill Notables in all our PDF Extended History products and printed products wherever possible.

In the United States, the name Gaskill is the 6,082nd most popular surname with an estimated 4,974 people with that name. [7]

Gaskill migration to the United States +

Gaskill Settlers in United States in the 17th Century

Gaskill Settlers in United States in the 18th Century

Gaskill Settlers in United States in the 19th Century

Gaskill Settlers in Australia in the 19th Century