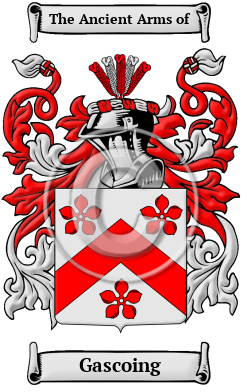 The medieval era saw many new names come to France. Gascoing appeared at that time in the region called Gascogne. It was a name for someone who lived in the French province of Gascoigne or Gascony.

Early Origins of the Gascoing family

The surname Gascoing was first found in Gascony (French: Gascogne), an area of southwest France bordering Spain, that was part of the "Province of Guyenne and Gascony" prior to the French Revolution, where they held a family seat in the seigneurie of Garidech, and were a prestigious aristocratic family of south-west France who also held estates in neighboring Languedoc to the east.

Early History of the Gascoing family

This web page shows only a small excerpt of our Gascoing research. Another 93 words (7 lines of text) covering the years 1535 and 1577 are included under the topic Early Gascoing History in all our PDF Extended History products and printed products wherever possible.

French surnames were subject to numerous alterations in spelling because of the various cultural groups that inhabited specific regions. Eventually, each region possessed its own local dialect of the French language. The early development of the French language, however, was also influenced by other languages. For example, Old French was infused with Germanic words and sounds when barbarian tribes invaded and settled in France after the fall of the Roman Empire. Middle French also borrowed heavily from the Italian language during the Renaissance. As a result of these linguistic and cultural influences, the name Gascoing is distinguished by a number of regional variations. The many spelling variations of the name include Gascoing, Gascoign, Gascoigne, Gascon, Gascoin, Gascogne, Gasco, Gascouin, Gasciogne, Gascoyne, La Gascogne, Lagascogne, La Gascoigne, Lagascoigne, Cascoigne and many more.

Notable amongst the family at this time was Sir William Gascoigne (1350?-1419), English judge, eldest son of William Gascoigne, by Agnes, daughter of Nicholas Frank, was born at Gawthorpe, Yorkshire. John Gascoigne (fl. 1381), was an English doctor of canon law at Oxford, was possibly the 'Jo. Gascoigne, cler.' who is named in a seventeenth-century pedigree (Thoresby, Duc. Leod. p. 177) as brother to Sir William Gascoigne [q. v.], the Chief Justice, and to Richard Gascoigne of Hunslet, who is said to have been father of Thomas [q. v.] Thomas Gascoigne (1403-1458), was an English theologian, son and heir of Richard Gascoigne and...
Another 279 words (20 lines of text) are included under the topic Early Gascoing Notables in all our PDF Extended History products and printed products wherever possible.

Migration of the Gascoing family

In 1643, 109 years after the first landings by Cartier, there were only about 300 people in Quebec, in 1663 there were only 500, 2,000 migrants arrived during the next decade. Early marriage was desperately encouraged amongst the immigrants. Youths of 18 took fourteen-year-old girls for their wives. The fur trade was developed and attracted migrants, both noble and commoner from France. 15,000 explorers left Montreal in the late 17th and 18th centuries. Migration from France to New France or Quebec as it was now more popularly called, continued from France until it fell in 1759. By 1675, there were 7000 French in Quebec. By the same year the Acadian presence in Nova Scotia, New Brunswick and Prince Edward Island had reached 500. In 1755, 10,000 French Acadians refused to take an oath of allegiance to England and were deported to Louisiana. Meanwhile, in Quebec, the French race flourished, founding in Lower Canada, one of the two great solitudes which became Canada. Many distinguished contributions have been made by members of this family name Gascoing. It has been prominent in the arts, religion, politics and culture in France and New France. Amongst the settlers in North America with this distinguished name Gascoing were Peter Gascoign who settled in Barbados in 1679; Charles Gascoigne settled in Philadelphia, Pennsylvania in 1859; P. Gascoigne settled in Baltimore, Maryland in 1820.