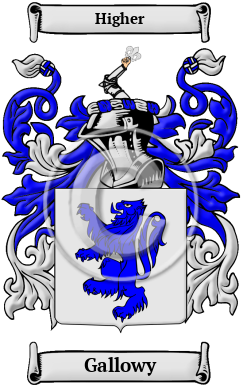 The name Gallowy was first used by the ancient Strathclyde-Briton people of the Scottish/English Borderlands. The first Gallowy family lived in Galloway, Scotland, an area covering what is now the counties of Kircudbright and Wigtown.

Early Origins of the Gallowy family

The surname Gallowy was first found in Galloway (Gaelic: Gall-ghaidhealaibh), an area of southwestern Scotland, now part of the Council Area of Dumfries and Galloway, that formerly consisted of the counties of Wigtown (West Galloway) and Kirkcudbright (East Galloway), where they held a family seat from very early times.

Early History of the Gallowy family

Surnames that evolved in Scotland in the Middle Ages often appear under many spelling variations. These are due to the practice of spelling according to sound in the era before dictionaries had standardized the English language. Gallowy has appeared as Galloway, Gallaway, Gallway, Gallowey, Gallaraw, Gallowray, Gallery and many more.

Notable amongst the family at this time was Patrick Galloway (1551?-1626?), Scottish divine, born about 1551. In 1576 he was appointed minister of the parishes of Foulis Easter and Longforgan, Perthshire. On 14 Nov, 1580 he was called to the Middle Church at Perth, and admitted on 24 April 1581. Galloway was popular as a preacher, and his services were sought in 1606 as...
Another 64 words (5 lines of text) are included under the topic Early Gallowy Notables in all our PDF Extended History products and printed products wherever possible.

Migration of the Gallowy family to Ireland

Some of the Gallowy family moved to Ireland, but this topic is not covered in this excerpt.
Another 57 words (4 lines of text) about their life in Ireland is included in all our PDF Extended History products and printed products wherever possible.

Gallowy migration to the United States +

Gallowy Settlers in United States in the 19th Century